I Am the Chainsaw Wielding Skin-Mask Guy of a Cannibalistic Murder Family. Here’s Why I Voted for Biden 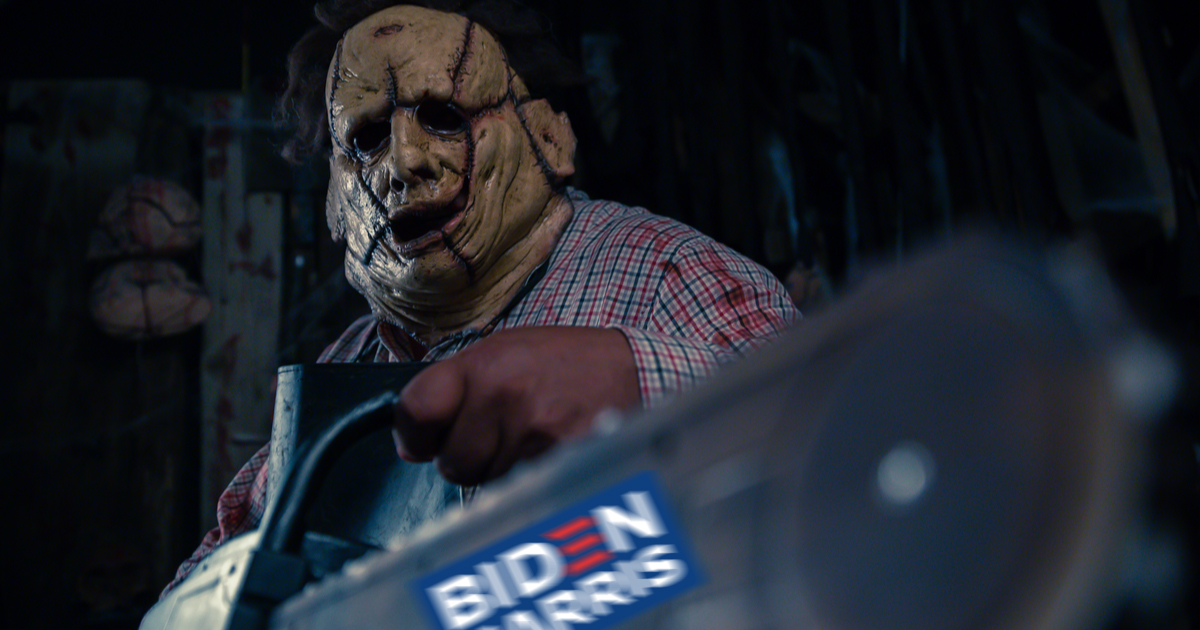 It’s the same routine every morning. I wake up, do some light stretches, and check to see that the people I hung up on the meat hooks the night before have finished bleeding out. I make my way downstairs to the dining room where my grandfather has his nose in a newspaper. Without fail, before I can pop the first slice of hearty fat-guy-back bacon into my mouth he asks, “You see what your commie president has done now?”

The fact that I voted for “Sleepy” Joe Biden has remained a constant source of tension since November. He’ll launch into an argument — mostly regurgitated Fox News talking points — and I’ll just sit there hiding silently behind my human skin mask. This is partly because I only communicate through obscene guttural noises, and partly because I know there is no point. Like many cannibalistic patriarchs of his generation, the old man is just set in his ways.

By now, you’ve probably made a lot of assumptions about me and my family; and I’ll be honest, a lot of them are probably right on the money. We’re Texans, through and through. We believe in the 2nd Amendment, we love our BBQ, and we subsist mainly off of the corpses of passersby we sadistically terrorize and murder. One assumption I must take umbrage with, however, is that we are ignorant bootlickers.

I may eat feet, but I’m no bootlicker.

The blind party loyalty that led to Donald Trump’s presidency churns my stomach just as much as my chainsaw-powered murder sprees must churn yours.

Take a step into my walk-in freezer and you will find people of every color, creed, and gender. While I fully condone high-brutality murder and the consumption of human flesh, I have never condoned discrimination, something I cannot say of one Mr. Donald Trump.

To all of the women, minority groups, and members of the LGBTQ community offended by Trump over the years, who I have not murdered, my heart goes out to you.

The turning point for me was when he disrespected soldiers wounded in battle. Soldiers are the backbone of this great nation, and wounded veterans are much easier for me and my clan of flesh-eating maniacs to run down and butcher. Shame on you, Mr. Trump.

Trump’s dismissive attitude towards the covid-19 crisis was deplorable. I am personally in very close contact with a number of strangers every single day, and I can’t support a leader who doesn’t take the pandemic seriously. I’m taking it very seriously, and aside from bathing myself in the blood of anyone within five feet of my sick-ass chain saw and eating their flesh, I am taking every precaution possible.

Joe Biden and I may not agree on key issues, but at least he is a sane and competent man. Besides, my grand-pappy can call him a sleepy communist all he wants, but I remember the day Joe’s campaign bus stopped at our gas station for some BBQ. When Joe called it “the best meat I’ve ever had!” and ordered seconds, Grandpa was grinning ear to ear.