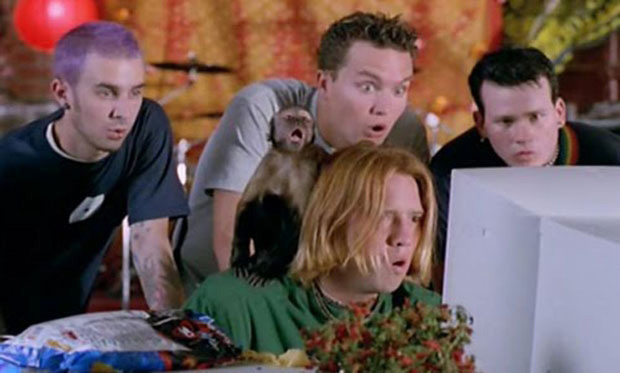 Growing up I thought high school was gonna be full of parties and whacky hijinks where my three best friends and I would chase girls and make fun of each other’s moms, just like in the movie American Pie. But I’m here to tell you, high school is NOTHING like American Pie, except Tom Delonge is there for some reason

Four years ago I would have called you crazy if you told me that the only correlation between my high school experience and American Pie is that, for no explicable reason, Tom Delonge is there just hanging around. I guess I’m the crazy one. Well, maybe Tom is the crazy one.

Related: Meet the First 181 Blinks That Never Made It to Market

I love American Pie. There’s the titular pie scene, the bandcamp joke, and of course, Tom Delonge’s incredible cameo that came out of nowhere. Seriously, he had absolutely no reason to be there. Just like he has no reason to be at my high school day in, day out, just kind of hanging around reacting to stuff.

My friend has a locker near Tom’s usual spot so we hang out there during lunch and breaks. I mean, it’s still weird as shit, but he’s still famous so why not? At first we felt cool when he’d lean in while we were talking and laugh at our jokes or respond to our stories with stuff like, “woah” and, “oh shit” and, “the moonlords are among us.” You know, typical pop punk frontman stuff. But after a while it was clear that he wasn’t actually listening and more just on a loop, repeating the same phrases and gestures at even increments throughout the day.

I can’t describe the disappointment these four years have been. High school is nothing like American Pie.

I did fuck a cobbler though.