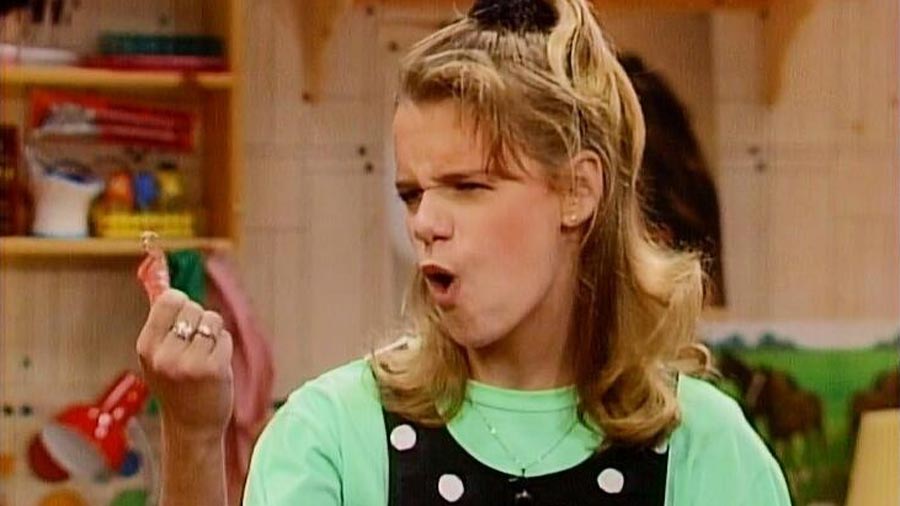 Everyone remembers Full House, the heartwarming family friendly ABC comedy about having a dead wife. But what you might not remember is how much work went into filming each episode!

During scenes involving the well-meaning but annoying next door neighbor, Kimmy Gibbler, a special handler had to be brought on set to ensure its safety and well-being. Halfway through the first season, a dispute over the handler’s payment forced Full House to move production to Canada, where laws regarding the ethical treatment of Kimmy Gibblers were more lax.

At five different points in the shows production, incidents during filming required the crew to bring in a new Kimmy Gibbler to finish scenes:

1) S5E19 “The Devil Made Me Do It” (1992) – After D.J. explains to Kimmy that there is a B in the word dumb, Kimmy exclaims, “Where? I hate bees!” The shot was left in the finished episode, but immediately after the line was said, an actual bee that wandered into the studio stung the Kimmy Gibbler’s neck, causing it to go into anaphylactic shock. It was not taken to a hospital and production went forward, uninterrupted.

2) S8E10 “Under the Influence” (1994) – In this episode, Kimmy Gibbler gets very drunk at a college party and is removed by D.J. In reality, the intoxicated Kimmy Gibbler was allowed to drive off into the night on its own seven times before it was successfully stopped by D.J. That’s eight dead Gibblers for those of you keeping score.

Related: 4 Ways to Get out of Watching Twin Peaks With Your Girlfriend

3) S4E05 “Good News, Bad News” The Gibbler initially used on this episode achieved sentience and was put down by handlers for ethical reasons.

4) S1E14 “Half a Love Story” (1988) – Even though there isn’t a Kimmy Gibbler in this episode, there was one present on set during a small fire. Fortunately, nobody was harmed, except for the Gibbler, which was left in its cage during evacuation and asphyxiated due to smoke.

5) S7E18 “Kissing Cousins” (1994) – When Uncle Jesse’s (John Stamos) cousin Stavros (also John Stamos) comes into town, he cons the Tanner family out of house and home. But nobody received the treatment quite as bad as Kimmy Gibbler, who was killed by John Stamos while still in character, method acting the part of Cousin Stavros. Stinking of gin and soiled with grease and sweat, “Cousin Stavros” assaulted the Gibbler with a revolver that was later wrestled away. Stamos’ lawyers were able to convince the staff that the revolver was a central part of his character as a Greek man, and he was later allowed to wear it on set.