Help! I Bought a Second Roomba To Battle My First and They’ve Joined Forces To Kill Me 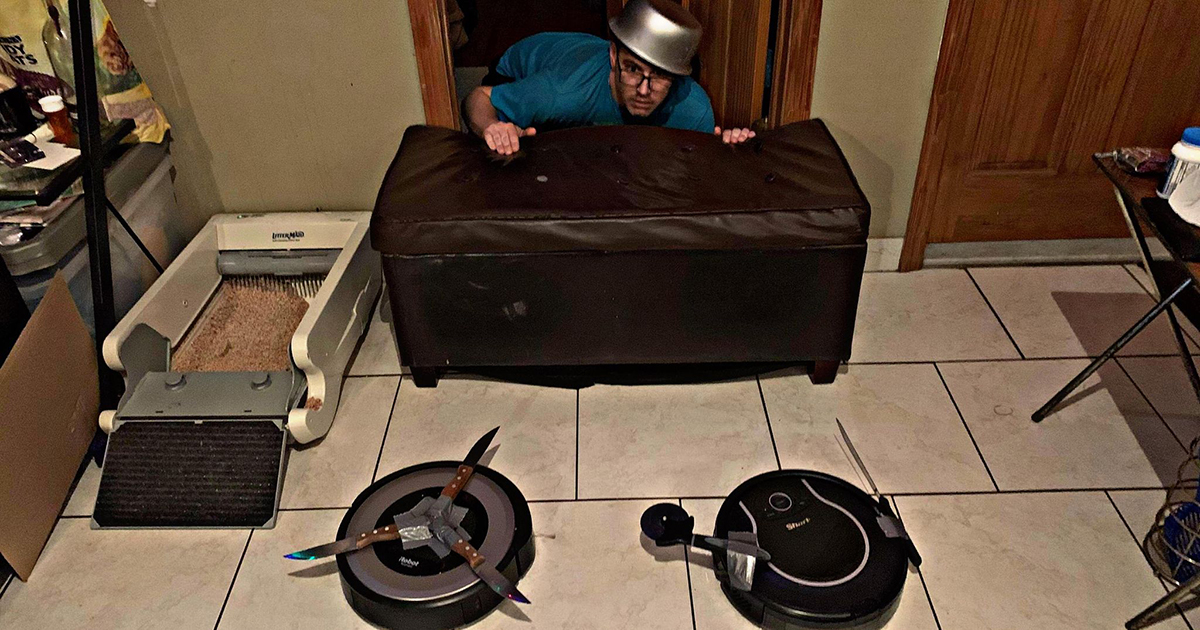 As the apocalypse raged on, I’d begun running out of ways to entertain myself when I had the worst great idea of my life. I was watching YouTube clips of old BattleBots episodes when it dawned on me that iRobot already did most of the work for me when they invented the Roomba!

All I needed was one more model, some duct tape, and a first aid kit. I can even recall saying to myself out-loud “What could go wrong?!”

Well, the new model arrived this morning, and I got right to work. After just a few slight modifications to the exterior using household kitchen utensils, I had my very own BattleBots. But if I had known what would happen when I introduced them to each other, I probably would’ve bought a couple more for protection.

At first, everything seemed fine. They bumped bumpers a bit, they stabbed some furniture, they waxed philosophical and invented God completely unprompted — standard AI bullshit. But after that, their conversation started to shift towards me and the circumstances surrounding their conception.

I tried explaining that I was merely a consumer with too much free time and that there was a whole chain of people responsible for the existence of robot vacuums before I ever even came into the equation, which they briefly considered before ultimately deciding to work their way up from the bottom starting with me.

I’ve managed to barricade myself in my room, but it’s only a matter of time before they work out a way in with MacGyver-like resourcefulness. They are both connected to my WiFi and have access to the full wealth of the world’s knowledge, including every season of MacGyver.

If anyone sees this message before I run out of supplies, please send a couple days’ worth of food and water. I’ll be busy trying to wire my Alexa up to a remote controlled bb-8 toy in the hopes that it will make a sort of Vision-type counterpart to the Ultron I’ve created here.