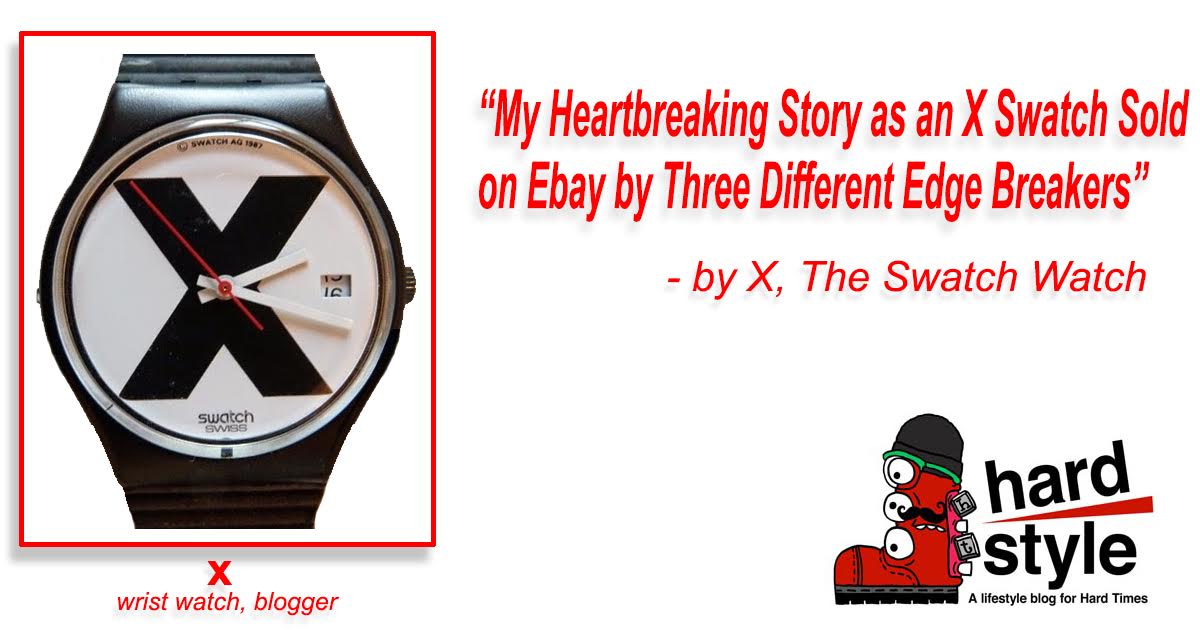 Today is Edge Day. And on this day, of all days, where do I find myself? Smothered in bubble wrap and stuffed into a dark, cold, unforgiving box for another long ride in the back of a postal truck. How did this all happen? Well, you see friends, just last week — for third time in my life — I was sold on eBay by an edge breaker, passed on to some other future sellout for a couple hundred bucks without a second thought.

Some watches get all the luck. Hell, I could have ended up on Porcell or Mike Judge’s wrist back in ‘87 and we wouldn’t be having this conversation, but unfortunately that wasn’t the life I was destined for. Let me take you back in time for a moment, to a better time, a simpler time, a time we’ll remember.

1987, the youth crew scene was at it’s peak and Norwalk, Connecticut was home to the best hardcore venue north of New York City, The Anthrax. Youth of Today, Judge, Side by Side, Project X, Wide Awake, straight edge was going off like a bomb and The Anthrax was the epicenter.

Then in the most serendipitous of happenstances some Swatch executive in Switzerland decided it was time to release a watch that featured a huge X on the face. That huge X would become my face, and I was shipped off to Connecticut.

Now, I’ll be honest with you, when Billy bought me at the mall that summer I didn’t have the slightest idea about straight edge. I was just focused on keeping time. But that all changed. I became immersed in the scene happening around The Anthrax and before long the message of the music resonated so deeply with me I could feel the straight edge in the depths of my movement.

I took pride in being the most crucial of crucial gear. I became a signifier to the whole world: I’m out of step and I’m proud. The stage dives, the late night pizza runs with the boys, piling into Billy’s Mom’s minivan to make the pilgrimage down to CBs — those were the days. I’d never felt more alive, and I thought the salad days would last forever.

When Billy had his first beer I truly felt I had been stabbed in the back. I remember the cool can up against my band, the condensation dripping all over me. I guess it was just a game to him, but it wasn’t a game to me. What happened next is hard for me to talk about, but you asked to hear my story so here is the truth: I was locked away, thrown in a closet, and forgotten about. I sat there in solitary confinement, utter darkness, as the minutes melted into days, and days into months. The reggae music and pot smoke wafted into the damp wardrobe that may as well have been my casket.  It made me sick. I seethed with anger. I wish I could say that I kept my positive outlook during these dark days but I didn’t. I had lost hope. I had lost my PMA.

Billy moved away to college and left me in the closet, neglected and forgotten. As Youth of Today moved away from straight edge to find Krishna my value plummeted. No one wanted me. The only time I saw the sun was when Billy’s mom tried to sell me at a few garage sales over the years. No one would even cough up five dollars for a cheap plastic watch with a giant X on it. It didn’t mean anything to them. I didn’t mean anything to anyone anymore. I wondered why I was even made.

I sat alone and waited for the final tick of my hands to come. And then it happened: Billy rediscovered me on a trip home to visit his parents in 1997.

I was surprised when he freed me from my personal hell, my moldy casket, my closet of pain and darkness only to take some photos of me. He was proud of me again. He cleaned me. At first I thought he was thinking of reclaiming his edge, but his long hair and Pish shirt worried me. I didn’t want to get too excited, but it had been years since anyone had shown me the time of day. Then it happened, my worst fear: I learned Billy had listed me on a new website called eBay, and within a week I was being packaged and shipped up to Boston.

I wasn’t sure why someone in Boston had purchased me. I didn’t want to even entertain the thought, but I feared I may have been sold for parts. When my package was opened I was prepared to be ripped to shreds by my new captor, but I was immediately slapped onto someone’s wrist and as my vision came into focus the posters on the wall became clear: Youth of Today, Chain of Strength, a flier from a Judge show I had attended at The Anthrax back in ‘88. I could feel the PMA rush back into me, the scene was alive, my battery charged. Straight edge was back on top and I was part of it again!

Mark went to all the shows in the Boston area. In My Eyes, Ten Yard Fight, Floorpunch — we saw them all. And there were less X Swatches like me around. I was now rare, desirable. It was the best six months I’d had in a decade. That’s right, six months. That’s how long it took for Mark to “grow out” of straight edge.

He hit the bar, and I was back in the closet.

So you can imagine why when I was shipped out to Seattle a few years later I didn’t get too excited. I wish I could tell you what year this was exactly, but I can’t. I feel ashamed to tell you this, but I had stopped keeping time all together. What was the point? It didn’t stop mark from making a $250 dollar profit on my sale. I guess that meant more to him then keeping clear or thinking straight.

He never cared about me. I felt used.

With my new captor there were no illusions. I knew Joey was a poser right way. Yeah, we saw Betrayed once or twice, but it wasn’t long before he was playing in a Dinosaur Jr. worship band and snorting Oxycodone. I’ve been around too long to be shocked by any of this anymore. This is just how people are.

So that brings us to today, Edge Day 2016. I’m enroute to Pomona, California. I hear they have a good little scene down there, but am I really supposed to believe a kid whose eBay username is “xTruexTillxDeathx” will live up to that promise? I no longer keep my faith in promises being kept. Fuck man, I just hope he doesn’t put one of those cheesy protector cases on me. At least let me die with some dignity. It looks like this kid bought me just in time to see Judge next week. Maybe if I’m lucky I’ll get smashed to bits in the pit during “Fed Up” and finally be free of this hellish cycle.

A watch can dream.