For God’s Sake Won’t Someone Please Help Me Remove This VIP Festival Bracelet, It Is a Constant Reminder of the Horrible Accident That Killed My Wife 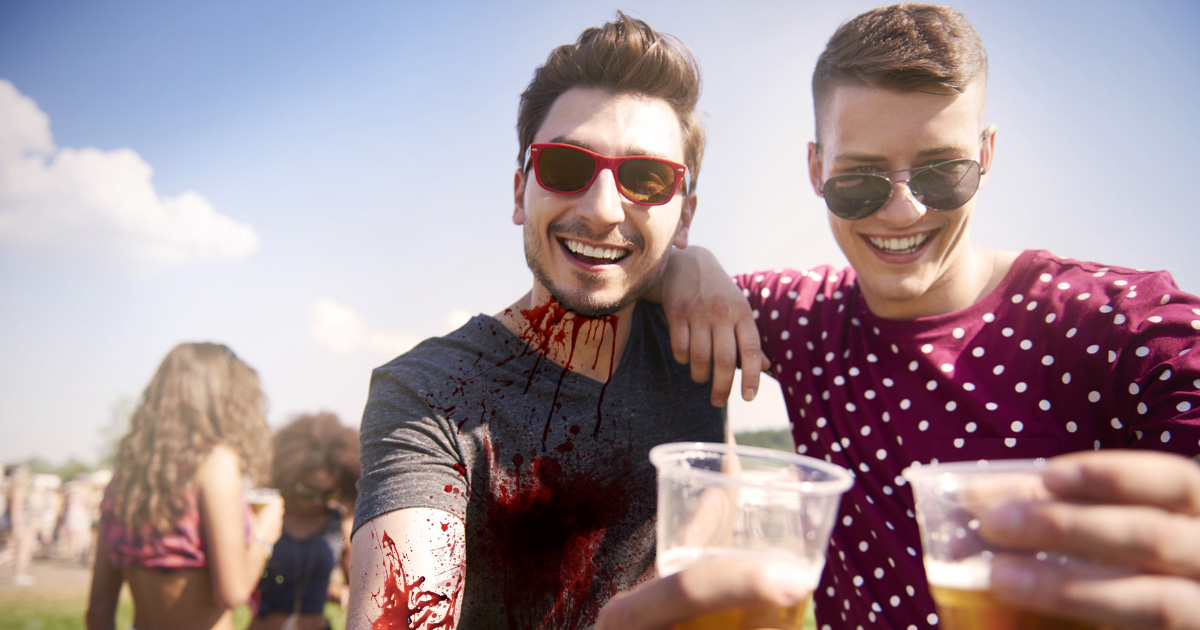 Erica, oh my God, no! Erica? ERICA??! Nonononono please come back to me. This can’t be real. My beautiful Erica, snatched from me in the blink of an eye. If only I could kiss you once more. If only I could tell you how much you mean to me. If only I hadn’t bought two non-refundable VIP packages to Bonnaroo on Groupon and made you stand next to me on the side of the stage during Juice Wrld (even though you don’t really like him) where a faulty stage truss fell directly on top of you and crushed you to death.

I have many wishes right now, my dearest Erica. Chief among them is getting this VIP wristband off without totally ruining it so I can prove to my dick head brother that I was like 15 feet from Juice Wrld. Then maybe… just maybe… I might finally begin to heal.

What is this friggin thing made out of anyway, some sort of advanced alien polymers? I seriously almost dislocated my fingers trying to pull it apart. It’s been nearly 24 hours since my love was taken from me and whenever I look at it all I can think about is how fucking jealous Craig is going to be when I prove to him I was so close to Juice Wrld I could basically smell his cologne and how it’s the exact same bracelet my dead wife (Erica) had on when they pulled her unrecognizable corpse from the mangled wreckage of that faulty stage truss.

This very bracelet that is going to make Craig wish he never posted that video of me falling off a horse is precisely the same one that granted her access into the exclusive VIP side-stage lounge where her soul would ascend into heaven during the first song of Juice Wrld’s absolutely epic performance. I wonder if Erica is still wearing her bracelet in heaven. She wasn’t nearly as strong as me and, like I said before, I’m having a really hard time removing it.

Of course, they probably have super duper sharp scissors in heaven so Erica definitely lucked out there. But back here on earth I, of course, had no choice but to rent an apartment like 20 minutes from the nearest Target. But honestly, even if Target was directly next door there is no fucking way I’m going to spend $15 on a new pair when I know for a FACT I just bought some last December. There must be some other way to rip through whatever enhanced fabric this thing is made of so I can forget the inhuman sound Erica made when her head was caved in by a rebar joist once and for all.

Oh my sweet, sweet baby. Please, if you’re out there- if our love is as strong in death as it was in life- give me a sign as to how I might get this bracelet off so I can move on from this tragedy while still having a sick souvenir to rub in Craig’s face. It is a painful reminder of not only the accident that killed you, but also the weird sound thing your throat made because you were currently drinking an overpriced margarita that you’re never going to be able to Venmo me for like you said you would and Juice Wrld’s insanely comprehensive set list and incredible production that Craig will never see because he’s a fuckin lame ass piece of shit.

I understand not making it out of paper because bootleggers and counterfeiters might duplicate it and sell it or pass it back and forth between people who didn’t get the VIP package on Groupon without checking with you first like I did, but couldn’t they make the locking mechanism out of a material that can dissolve in water or something? That way, if the wristband reminds you of your wife’s absolutely gruesome and unnecessary death you could take it off but still have it in tact for when you wanted to make your shit head of an older brother jealous.

What is this irreversible drawstring bullshit? I’m like a prisoner. Oh and also, of course, a widower. Your soul is freed from its mortal coil, my precious Erica and I know that God has set a place at his table for his newest, most perfect angel. I just hope he doesn’t make you wear one of these VIP bracelets to get a drink though! Hahaha just kidding. Rest In Peace for real, all jokes aside. I will never forget you, especially if no one can help me get this bracelet off without ruining it before I have a chance to show Craig. He’s going to be so fucking jealous. I wish you were here to see his face!