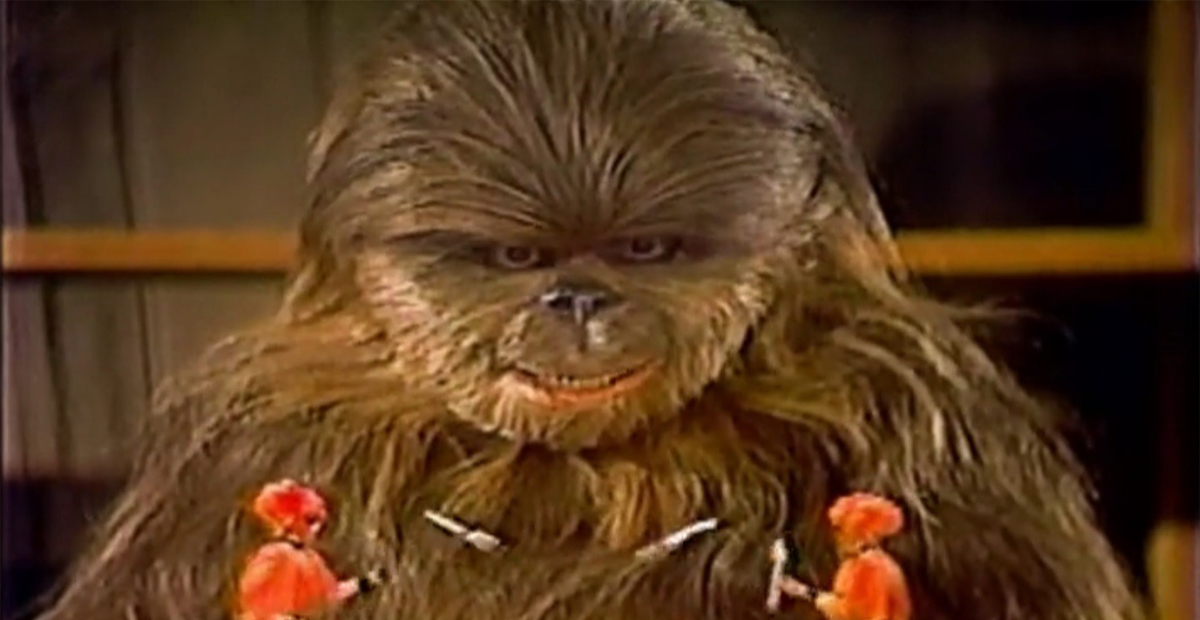 While the release of The Last Jedi is sure to bring joy to millions of fans worldwide, to one little “Padawan” it serves as nothing but a reminder of just how far down rock bottom can be. Since making his debut in the CBS-produced Star Wars Holiday Special Lumpawarrump of Kashyyk, “Lumpy” has lived a life riddled with career hardships and personal tragedy, his once promising career vanishing faster than a T-70 X-wing hitting hyperspace.

Speaking through an interpreter at his one bedroom apartment in Reseda California, the arboreal mammal detailed his descent into Hollywood hell.

HS: Was it tough growing up in someone’s shadow?
Lumpy: Chewbacca was a good father, even if he was a little absent for the first two decades of my childhood. It was my mother, Mala, who pushed me into acting. Looking back, I think she just wanted another meal ticket in case Chewbacca left her — she was addicted to death sticks and they fought a lot about it. Anyway, I didn’t want to disappoint her so I worked hard, nailed my audition, and got the part. I was going to play the roll I was born to play, myself.
HS: The Star Wars Holiday Special has long since faded into obscurity. Were expectations for it high at the time?
Lumpy: Oh absolutely, no one thought it could fail! My mom kept telling me what a big star I was going to be and how important I was. I had an agent feeding me lines about how there was going to be a Lumpy solo movie — when he wasn’t busy feeding me speed that is.
HS: Was drug use prevalent on set?
Lumpy: Are you kidding? Every member of that crew made Carrie Fisher look like a nun. I was the one who suggested we do the whole opening in shyriiwook with no subtitles and the director was so strung out on cocaine and video head cleaner he actually did it! That and mini-Jefferson Starship were both my ideas. I guess you could say that’s when my ego started to get pretty big.
HS: And that lead to violence?
Lumpy: I flipped on the craft services guy when one of the hologram jugglers ate the last of the Bantha Surprise. I grabbed his throat, not knowing how weak human throats were at the time, and damn near killed him. I was removed from set and Patty Maloney shot the rest of my scenes in a cheap suit.
HS: Let’s talk about that infamous Ewok movie wrap party.
Lumpy: A Gorax fella I used to buy crank from invited me to the last day of filming and we ended up partying with these two Ewok babes. I didn’t know how old they were. Wookies live to be 200 years old. I was a child up til age 50. I figured it was the same with them. We’re both tree folk. All I knew is they liked drinking Polyquaternium-7 and during sex they liked to be choked. That’s all I remembered before I blacked out. Next thing I know I’m in front of a Gabanian counsel pleading not guilty to mammaloidslaughter. I managed to get the charges dropped eventually but it cost me every credit I’d ever earned. It should have been a wake up call.
HS: But it wouldn’t be the last time one of your drug-fuelled acts of violence and sexual deviancy made headlines, would it?
Lumpy: No, it wouldn’t.

Related: It Shouldn’t Take 25 Hours of Gameplay to Unlock the Ewok Crying About His Dead Friend

HS: It must have been hard losing your mother under those circumstances.
Lumpy: Yes, but it’s what drove me to finally get clean. I went to rehab. Then I got a job at a print shop where I met the woman I eventually married. We had a son. Things were finally peaceful.
HS: But it wouldn’t last, would it?
LUMPY: No, it wouldn’t.

Lumpy’s son ChewChew drowned to death at a birthday party on Skywalker Ranch. The incident drove his wife to suicide, and drove Lumpy straight back to black tar heroine.

HS: Your personal tragedies were well publicized, did this contribute to your relapse into drugs?
LUMPY: It didn’t help.
HS: But you eventually got clean again?
LUMPY: No, I didn’t.

Nowadays Lumpy makes sporadic appearances in the parking lot of Comic Book Conventions and sells 8x10s and autographed bootleg VHS copies of The Star Wars Holiday Special through his Facebook page and from the trunk of his car.

HS: Is that one of those breathalyzer car starters?
LUMPY: I get paid for this, right?