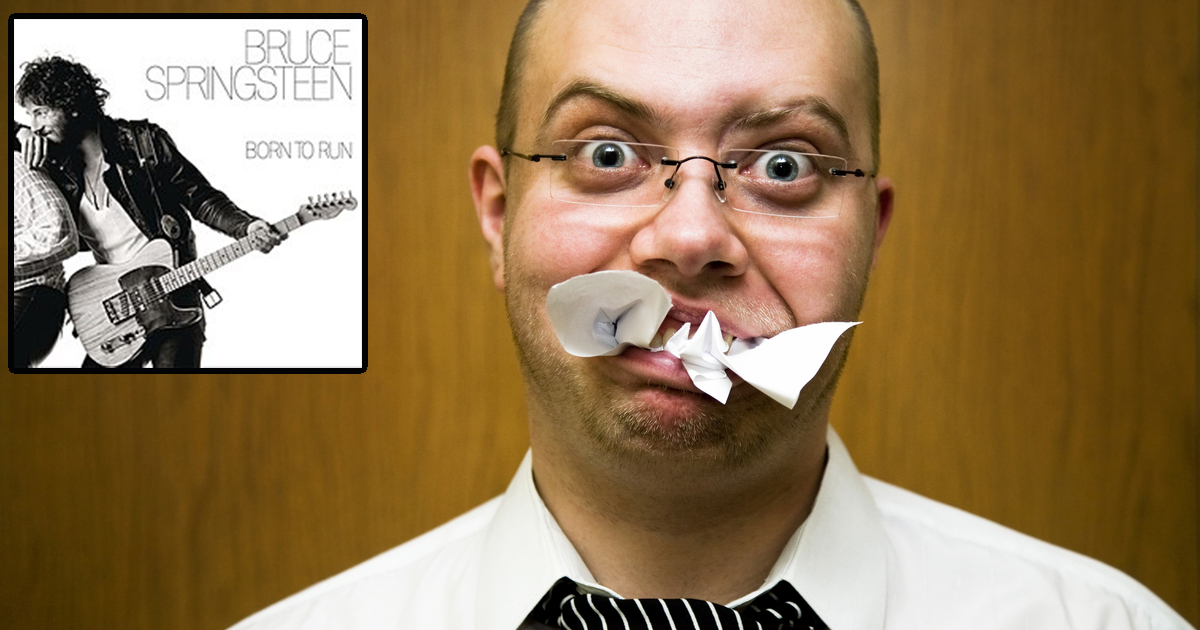 Bruce Springsteen is the greatest musician of all time and I refuse to entertain the notion that there is anyone who comes close to His level of mastery of the written word.

I started writing His lyrics on pieces of paper and bringing them with me, as a way to empower myself. Shortly after, I began consuming them, so that I can have His power with me, always. Here are a few of the tastiest, and why I eat them:

5. “You get up every morning at the sound of the bell / You get to work late and the boss man’s giving you hell” – Night

With this, I am manifesting a life of nine to five monotony for all of my enemies. I used to think that I wouldn’t wish this on my worst enemy, but now, having lived it myself, I have reconsidered. Fuck ‘em.

Nobody knows that I have powers. They can’t understand that I am not one to be trifled with and pushed around, because I am able to consume the words of Bruce Springsteen and make come alive.

4. “I want to guard your dreams and visions./ Just wrap your legs ‘round these velvet rims / And strap your hands across my engines” – Born To Run

Like many working class Americans I dream of becoming a car, and then fucking a consensual, age-appropriate partner. I don’t know if I would be dominant or submissive and I don’t really care, just as long as I am a car and my partner is a human being.

I want this to happen for me, and through Bruce, I believe it to be possible. With every swallow of these words I feel it. Little by little, day by day, I am becoming a sex car. Soon pleasures beyond the boundaries of carbon based bipeds will become known to me, all through the majesty of The Boss.

3. “Well I got this guitar, and I learned how to make it talk” – Thunder Road

I bought a telecaster at the start of the pandemic, and it’s just been sitting in a corner of my bedroom since. But around the time I started eating Springsteen lyrics the guitar actually began to speak to me. Sometimes it tells me secrets, sometimes it tells me to do things.

2. “One soft infested summer / Me and Terry became friends” – Backstreets

It would be sick to be friends with a dude named Terry. I think If I had a friend named Terry, I would tell him about my powers. The ones that let me eat Bruce Springsteen’s lyrics and manifest them into the real world. I would explain to Terry that this is NOTHING like the time I ate a bible to become God. That was crazy, and I see that now. My eyes are open Terry, it’s clear.

1. “From the churches to the jails / Tonight all is silence in the world” – Jungleland

When the world sees that I have condemned my enemies to monotony and transformed myself into a powerful sex car, all of the old institutions will crumble. No more religion, no more incarceration, no more war. Earth will become a paradise where some people are cars and other people stay human so that they can have sex with those cars.