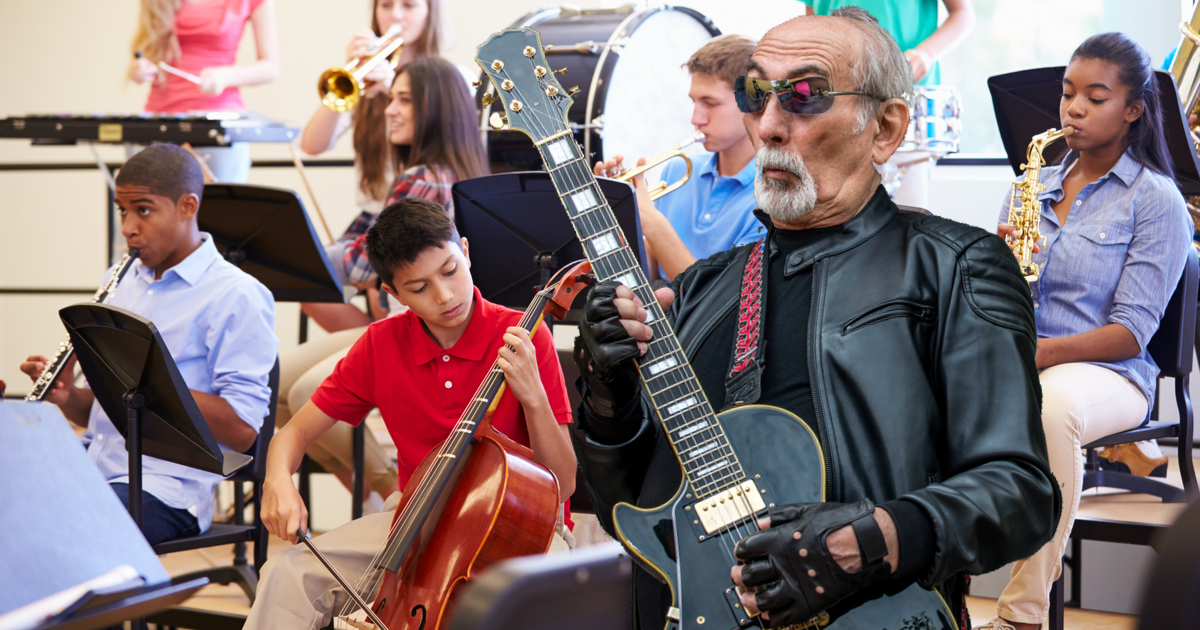 Dads are lame. Even if your dad can occasionally impart a life lesson or bring you a case of toilet paper from Costco, dads can embarrass you in pretty much any situation. For example, take my dad. His intentions may be noble, but his belief that he can enhance any musical event by crashing the stage and insisting he knows how to play Eddie Van Halen’s “Eruption” solo is very misguided. Especially since he can’t even play guitar.

Here’s a non-comprehensive list of every concert my dad has completely fucked up in this very specific way:

Kindergarten Winter Concert, 1986 – Everything was going swimmingly at the Adams Elementary Kindergarten Winter Concert. The kids were having a blast blowing on kazoos and stuff. That is, until my father, under the mistaken impression that parents were expected to contribute to the performance, jumped on stage, knocked over three kids in snowflake outfits, and asked where he was supposed to plug in his guitar. He managed to get a few notes in before Coach Marsden tackled him.

“Peter & the Wolf” Middle School Production, 1990 – Fast forward a few years. The humiliation of the Winter Concert had faded and people had finally stopped calling me “Daddy Van Halen.” I was excited to play the part of the Grandfather. Then my dad strolled on stage dressed as Eddie and pulled a humiliating attempt at mimicking the drum intro of “Eruption” via mouth noises. He insisted he was just trying to improve Sergei Prokofiev’s work with “a little Halen.”

Battle of the Bands, 2001 – Okay, this one just sucked. As you probably already guessed, my dad (wearing a denim jacket and a wig) impersonated the lead guitarist of a local band and screamed at a 15-year-old bassist that he was “fucking throwing off the solo, jaghole!” They did not win the Battle of the Bands.

House Show, 2007 – Okay, this is one on me. I threw a party at the house for my band’s EP release. That was foolish. Then again, most dads would just break up the party when they got back from Tahoe early. Not my dad. He took a three-minute kegstand, then grabbed a guitar but cut his hand on a broken string so badly he made a random teen drive him to the ER. I got really depressed around this time. The only thing that snapped me out of it was the kids at school calling me “David Lee Goth.”

Warped Tour, 2016 – Me and my friends saw that Front Porch Step was getting to play select dates on the Warped Tour after getting cancelled for basically everything you can get cancelled for. We went to heckle him when, sure enough, my dad popped up on stage, causing the entire set to get shut down. Ya know, sometimes dads are pretty cool.