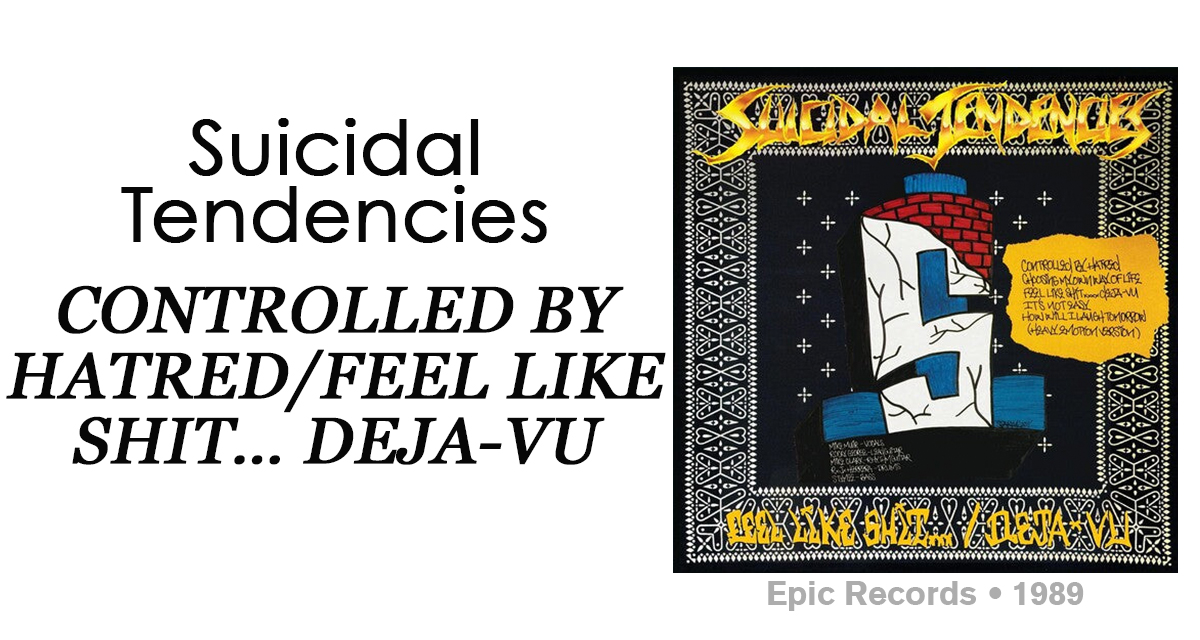 Each Sunday, The Hard Times travels back and reviews a notable album from the past. This week we take a close look at “Controlled By Hatred/Feel Like Shit… Deja-Vu” by the band that put the crossover thrash genre on the map, Suicidal Tendencies.

There are some things in life we cannot explain, déjà vu and thrash metal are two of them. What happens when you put those things together? You get “Controlled By Hatred/Feel Like Shit… Deja-Vu.” I came across this album on a recent cosmic quest to find the answers to why I’m experiencing the shittiest déjà vu of my life.

Let me paint a picture of what my déjà vu experience has been like: every morning I wake up, try not to think about killing myself, put on a pair of sweatpants, doom scroll for three hours, and Google why I feel like shit constantly. I’m in such a pattern of feeling like shit every single day that I’m experiencing a depression-triggered déjà vu. What I’m going through is a phenomenon that defies the laws of space and time because nothing can break the cycle. So, when I asked Reddit if anyone else has been experiencing a really shitty déjà vu, a thread popped up about this Suicidal Tendencies record.

Every morning I wake up, try not to think about killing myself, put on a pair of sweatpants… sorry! I just experienced déjà vu again. I’m so undeniably stuck in this pattern of feeling shitty that I can’t even remember what I said five seconds ago. Hence why I had to order this iconic album! I’m on a quest for the truth, but unfortunately, this album is just making me more confused than ever.

For starters, is it even an album?? Or is it just a compilation of two EPs? OR is it a cover album since they are covering their own music and Mike Muir’s other bands No Mercy and Los Cycos. These are the questions that haunt me in the dead of night when I’m trying to fend off feelings of existential dread. I think listening to this much thrash is making me lose brain cells which could only be making the déjà vu worse, and yet, I cannot turn it off.

I’ve tried to look for answers elsewhere. Olivia Rodrigo, Beyonce, Crosby Stills Nash & Young… they’ve all got music about Déjà vu! However, none of them seem to embody the absolute bottom-of-the-barrel “I Hate My Life” energy that propels from Suicidal Tendencies. “Controlled By Hatred/Feel Like Shit… Deja-Vu” may not make me feel better about being a piece of shit, but at least it makes me feel like I’m not alone with these terrible feelings.

SCORE: 5/5 Songs I Did Not Realize Were Covers