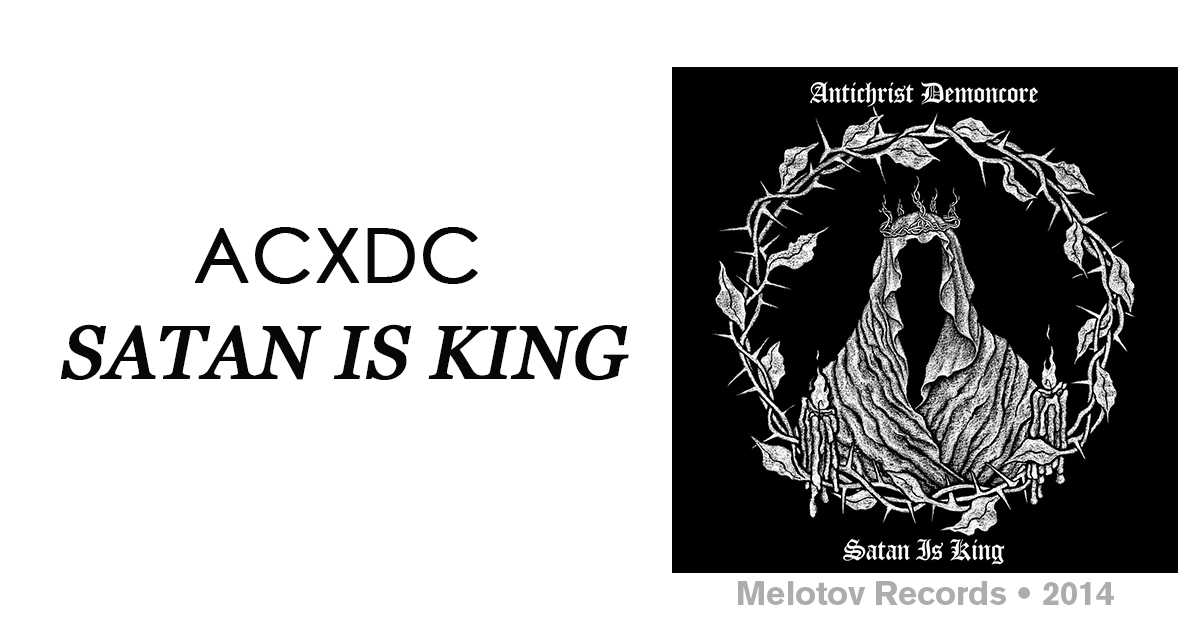 The other morning I woke up and was just in one of those moods where I was unwilling to try at all. I didn’t shower, didn’t eat, and just opted to let my dog pee on the carpet, which she prefers most of the time anyway. In my indifferent state, I did what any person just trying to get through the day without burning their apartment down or starting a fight over nothing with any of the three guys they’re currently fucking usually does — I turned on the radio and just planned to zone out.

After a little while my troubles slipped away and I was reminded that sometimes, it’s OK to just kind of suck when AC/DC’s “Highway to Hell” came on for the third time in two hours. I thought I would indulge that feeling a little more by seeking out more AC/DC to listen to, when I found ACXDC Satan is King. This seemed to be a departure from their usual sound because it was not how I remembered AC/DC sounding at all. Like, not even close. I did what any committed journalist would do and hit the comments section immediately to find out what everyone else’s opinion was on the matter so I could know what to think about all this, only to find hundreds of other people who were just as confused as me.

Apparently, ACXDC is a totally different band who must have just accidentally named themselves almost the exact same thing as a super famous band that already exists. I cannot imagine how embarrassing this must be for them, and also kind of can’t believe they don’t have a single friend or manager who cares about them enough to say something. I was super nervous to tell my friend June that her eyebrows are absolutely fucked, but possibly upsetting your friends to help them grow is just part of being in an intimate relationship. Plus, she ended up getting microbladed a few weeks later and now she looks amazing, so it all worked out.

Anyway, I didn’t really listen to the album as I spent the next several hours attempting to contact members of the band on Twitter, only to realize I had been messaging something called CBGB the whole day. By the time I got a hold of someone at TGIFriday, I realized that I hadn’t eaten anything since like 10 p.m. the night before, so I made a reservation.

I will give this album a 1 out of 5 stars, only because I can’t give zero stars, which I would if I could. I just think that if you’re going to start a band you should at least do a quick Google search to see if the name is already taken. The Jack Daniel’sⓇ Chicken Sandwich with a side of fries, however, earned a solid 9 out of 10 stars, and my server, Danica, was absolutely wonderful. Would definitely recommend.