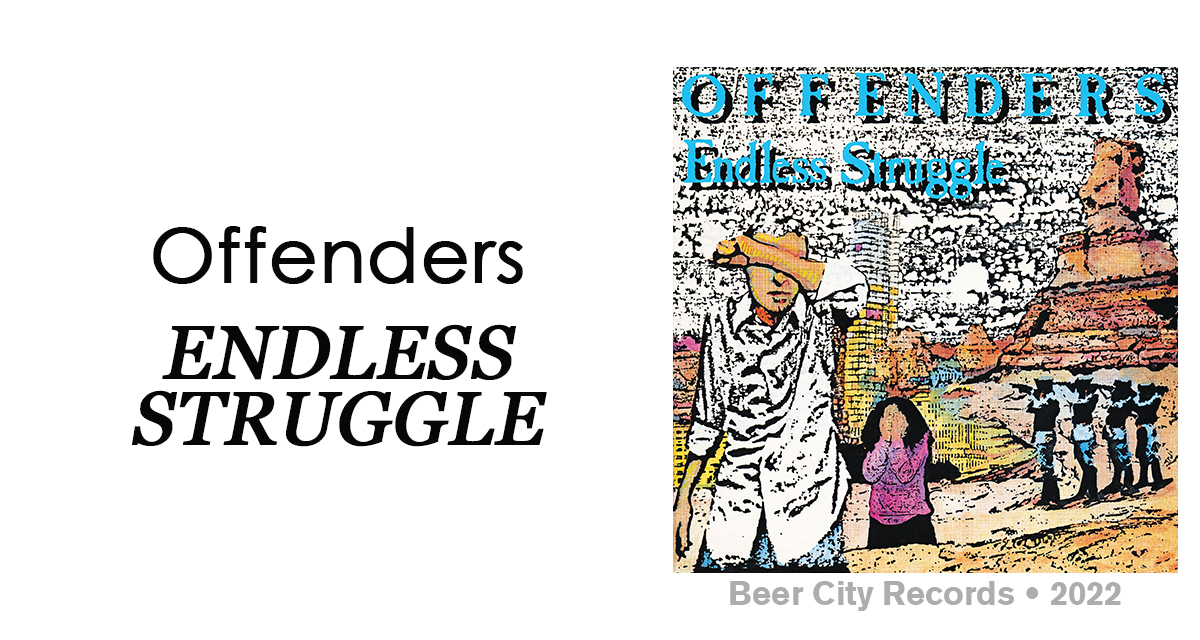 Killeen, Texas natives Offenders were a hardcore outfit that would go on to become a staple of the underground Austin scene through the mid-80s. “Endless Struggle,” the second and last of their full albums, was released in 1985 to as critical of acclaim as a Texan regional punk band could get in the Reagan era, and today we revisit every detail.

Listening to the lyrics of “Endless Struggle” really evoked a distinct type of nostalgia in me, specifically a yearning for the parties that my high school friends and I would throw in a literal quarry in our shitty rural hometown. You know, the ragers where you’re all underage and drunkenly standing on the precipice of a rock ledge where just under the water there is an abandoned Buick that will break your legs if you jump in and land on it. Then there’s like weird sand dunes and shit for people to jump an ATV over? You’re all shotgunning Natty Light? And you keep seeing these really intense images of police cars and your friend Annie yelling at you to run?

Huh, that’s weird. That felt like an actual memory as opposed to like, regular old wistful reminiscing. Anyway, since I couldn’t quite place why “Face Down in the Dirt” sounded so fucking familiar to me, I did a quick YouTube tutorial on how to recall repressed memories. After a few hours of staring into my phone and thinking super hard about how much I didn’t remember anything, it hit me: I had heard this exact track before. The night the cops finally busted us, and…oh, god–

It’s all coming back to me now. This album was playing the night I fell in the quarry. Holy shit, dude. I mean, I must have died, there’s no way I could have survived a fall like that. I remember an antenna from an old Buick slicing through my stomach, there was so much blood and I was stuck underwater. Is this technically a past-life regression, then? Am I fucking dead? Hello?? I said–am I fucking dead??

Sorry, no, I’m good. I forgot about the super-strong mushroom tea I made before sitting down to write this. I’ve either been writing for 25 seconds or several years.

I’ve definitely never heard this album before, but if I have, it has my approval as a cool soundtrack to become a ghost to.