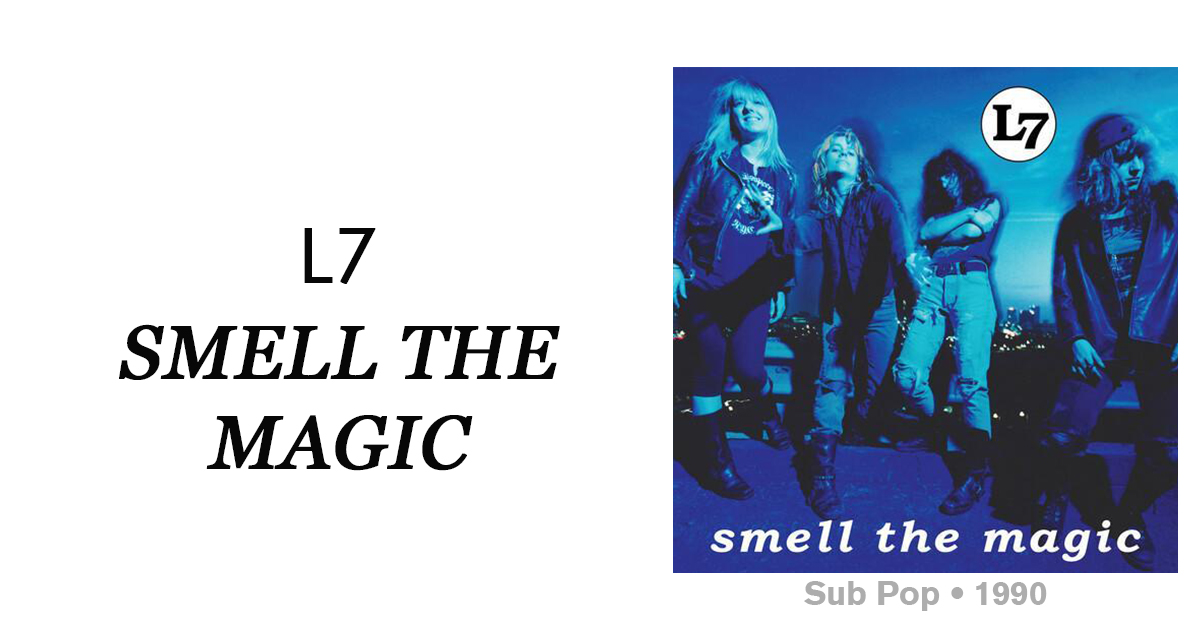 Each Sunday, The Hard Times travels back and reviews a notable album from the past. This week we review the L7 classic “Smell the Magic” released on Sub Pop in 1990.

When L7’s ‘Smell the Magic’ came out in 1991 I was nothing more than a plucky fifth grader, and therefore had not heard of it as I was too busy still letting my mom pick out my clothes for me and having funerals for dead worms I found on the sidewalk.

By the time I reached eighth grade, my mom was still picking out my clothes, which I wore to my hometown’s Coconuts Music & Movies to leaf through a little publication called SPIN. It was there that I first heard of L7 and learned about what their band and other bands like theirs were doing for women in music and the cultural landscape as a whole.

I, of course, did not listen to them at that time as I was a very late bloomer and found things that weren’t “Creepy Crawlers” and “Bath & Bodyworks Raspberry Vanilla Body Splash” confusing and therefore, frightening to me.

Fast forward to six years later, to my first year of not going to college but for some reason continuing to stay in my hometown instead. I was young, I was dumb, and I was full of coming to a new job for like, two shifts before no call/no showing and then just waiting for them to mail me my paycheck. It was on one of these bus rides to or from said job that I was listening to a mix CD made for me by a friend who knew how to work a computer. Track six was a song called “Packin’ a rod” which was my first exposure to the idea of nuclear fuel as a possible solution to the fossil fuel crisis.

Never before had I even heard of uranium rods, let alone heard the idea of them made to rhyme with other words and then set to music. I’m pretty sure “Sesame Street” actually did this sort of thing first, but if you think I’m going to tell Donita Sparks that, you got the wrong guy. Sure, nuclear reactivity isn’t without it’s faults, as I’m sure the fine people over at L7 aren’t either, but what are you going to do, go back to using a fucking oil lamp or something? I’d like to see you try it, buddy.

Anyway, this album single handedly made me think about studying physics. Unfortunately, I ended up getting really bad into pills instead. LOL. The good news is, the bus is a little more expensive than it was 20 years ago, but it has way more stops now, and they changed the seats from that carpet stuff to just plastic, which sounds uncomfortable but it’s actually not.

7/5 atomic particles (5 for the music, and then 2 more for being pioneers in the area of nuclear energy)