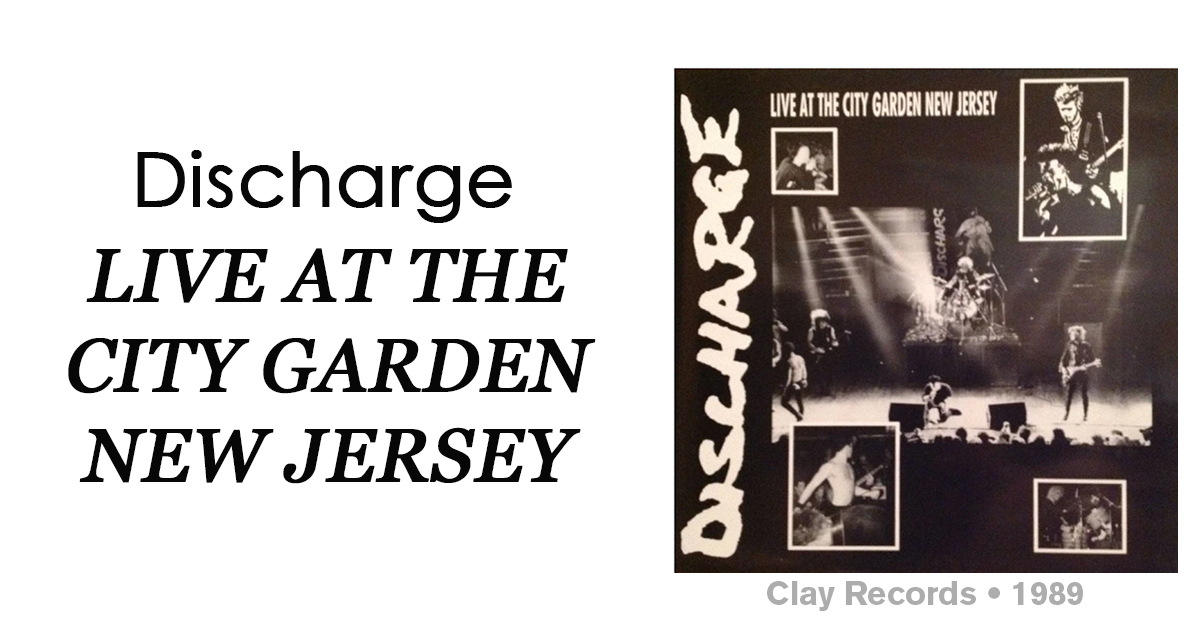 Each Sunday, The Hard Times travels back and reviews a notable album from the past. This week we tackle the legendary live album from Discharge at the height of their powers.

The year was 2021, which is this year, but it was last month, which honestly feels like a fucking lifetime ago and somehow also no time at all? Anyway, it was on a balmy spring morning that I woke up to the shock of a lifetime, for the sixth time that week, in my pants. As someone who prioritizes her health above all else, and just under ordering Seamless and looking at Instagram, I knew I had to seek help immediately.

A cursory search led me to pages upon pages of information about my possible medical condition. Naturally, I jumped to page 14, which is where everyone knows all the good information hides out. It was there that I found something called Discharge: Live at the City Garden New Jersey, which called to me as I had just been in a hot tub in New Jersey the week before. I ordered the album and it arrived two weeks later, by which point my pelvic area was weirdly sore and all of my leggings had to be burned for reasons I will not disclose.

The album was pretty good. The songs were screamy and short, unlike this problem I’m dealing with, which seems like it’s been here forever. It opened with a song called “Warning,” so I was fully prepared to find out whatever I have is with me for life, but it just kept going into more songs about breaking beer bottles or something. By the time I got to “Anger Burning,” I thought for sure I would get some answers, but the only thing burning was my pee hole, and apparently Discharge (the band) anytime they think about The Queen of England. Both the album and my internet search met me with the ultimate “Price of Silence,” for which I, and my fabric couch, paid for dearly.

The album did get me curious about the band. According to their Wikipedia page and not WebMD, Discharge (the band) are a bunch of anarchists who are also pacifists, which means they must have been like the brontosaurus of the music world. There are a ton of words like “grindcore” and “thrash” used to describe them, but there was nothing that really captured what I was feeling while I listened to it, which I would call “red,” “painful,” “smells bad,” and “clumpy.” The closest comparison I could make was “crust,” but I didn’t really understand why the “punk” part was at the end of it.

Honestly, listening to this music makes me feel kind of itchy sometimes, especially at night when I try to fall asleep or after I workout. But I guess art is subjective and affects everyone differently, so maybe that’s what makes it good. Unfortunately, this album did absolutely nothing to alleviate my burning vagina problem, but then again, I ordered some shoes that same day and they also did nothing, so I can’t be too hard on it.

Overall, I would give this album a 99% rating for the music, and minus 1% for the confusing name. Fortunately, there are no bands called Monistat-1 Maximum Strength and there’s a CVS like, three minutes from my apartment, so it all worked out.

Official review: Monistat 3 out of 7