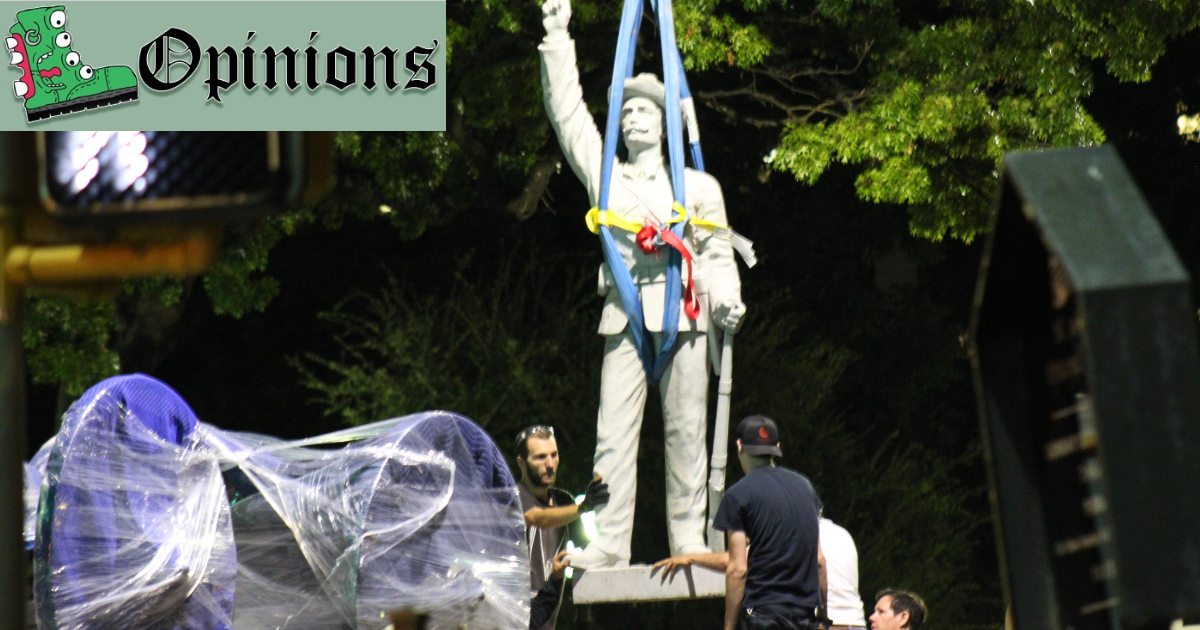 During the past couple of weeks, the national conversation has included discussion of proper ways of displaying confederate statues. There have been multiple cases of monuments being defaced, vandalized, or even torn down by protestors. We believe that these actions are counterproductive and unbefitting of these controversial, though historical, relics. We propose the best course of action is to move these symbols of a bygone era into an educational environment such as a museum so they can be presented in the proper context. That context being a smoldering pile of cinders once we burn that fucker to the ground.

Even though the statues of confederate generals and soldiers weren’t necessarily constructed during the Civil War era, they are a part of our collective heritage and we can’t deny our past. But thankfully our collective heritage also includes ancestors who fought against this shit and wouldn’t have a problem with taking a museum full of these dixie traitors and covering that bitch with turpentine and tossing in a lit cloth rag.

Don’t tread on us.

These statues might make some uncomfortable, especially if you’re pulling them with your back using flimsy ropes. However, they have been around for decades and have become a fixture in many communities so it’s important to be very careful and sensitive when ripping them down and melting them into a puddle of bronze goo. This will ensure that future generations will understand the full scope of the Confederacy’s actions and beliefs, in the sense they were a group of lazy, selfish losers and deserve to be tossed into the literal ash heap of history.

Now maybe you might worry about the precedent this will set. Are we going to take down historical statues of all those who supported slavery, such as Washington and Jefferson? Are we going to put them in a building made of highly flammable materials and watch the unforgiving rage of fire consume it? And to that I say: Sure! Why not? There will be plenty of space in the burning building for their slave-owning asses. And, yes, Washington and Jefferson did play a role in the foundation of a country that allows the freedom to call anyone out on their shit, no matter how powerful they are, and for that, they should be granted some recognition. After the fire insurance comes through we can make them a plaque and hang it in our museum’s “Important Racists of History” wing.