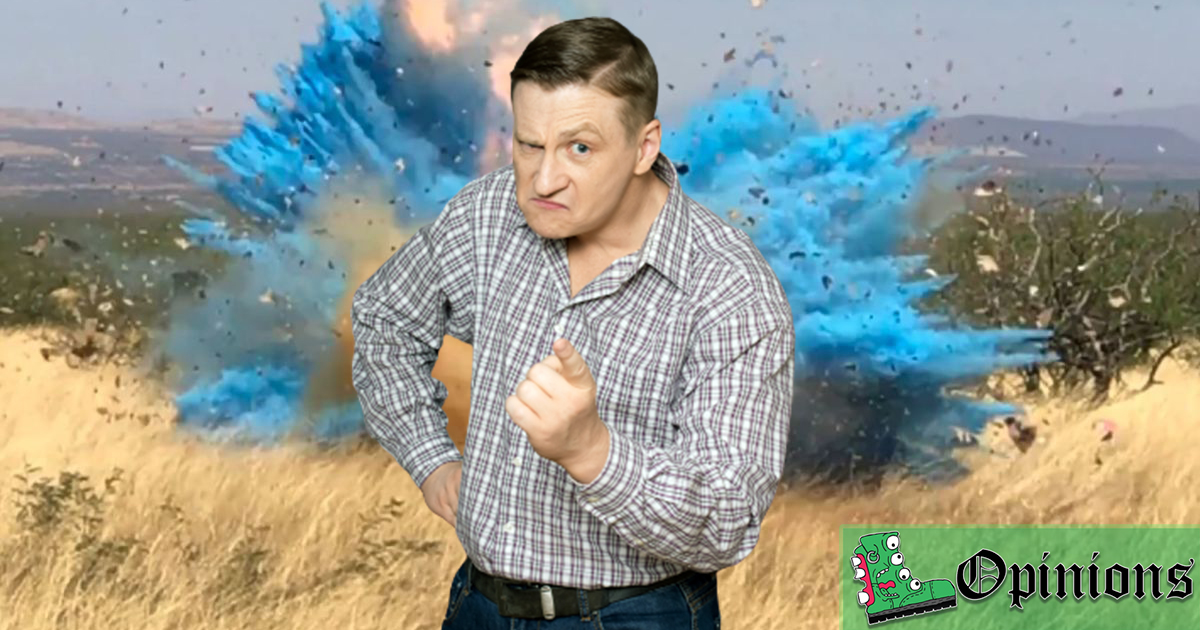 Your mother and I never thought we’d see the day that our child would sit us down and tell us that they aren’t a boy. That they don’t feel like they belong to any gender. Let’s get one thing straight, pal: we didn’t accidentally kill ten people, destroy hundreds of thousands of acres of forest, and cause mass evacuations just for you to tell us you’re “not actually a boy.”

I’m not one of these newfangled blue-haired SJWs who knows all these terms. Non-binary, genderqueer, all of that. What I do know is that we got a whole lot of people mad at us when we caused their houses to be completely burned to the ground, some with people still inside.

Your generation is honestly so selfish. “Use they/them pronouns, accept my lifestyle, do your dumb gender reveal literally anywhere but the woods.” You ask the world of us and then get mad when we burn it down!

It was supposed to be a celebration, and now you’re ruining the celebration. Just like that nutty left-wing judge who tried to throw the book at us. Do you know how much money that cost your grandfather to settle?

This isn’t what we imagined happening to our baby on that fateful day. Frankly, there’s a lot we hadn’t imagined would happen. How the hell were we supposed to know that shooting a MyPillow™ brand Gender Reveal Rocket Launcher upwards in the woods on a 105-degree day would cause a fire? We’re not scientists.

I know you’re disappointed, I’ve seen that face before. It’s the same face that the fireman had when he said that he had never seen such horrific devastation in his life and I said “hey at least it was blue smoke, am-I-right fella?” He smacked me in the face with his fire hose and said if he ever saw me again he’d shoot me on sight. Now here you are, smacking my heart with a metaphorical fire hose.

Weren’t we good parents to you? We fed you, we clothed you, we kept a roof over your head. That’s more than a lot of other parents can say. Especially the ones in a five-mile radius of that fire, they couldn’t even keep their houses upright. And then they all complained to the liberal media. But we just picked ourselves up by the bootstraps and had grandpa buy us a new, bigger house. But I guess that’s not enough for you.

Look I’ll level with you, it’s not a prejudice thing. Gay, straight, boy, girl, other, your mother and I don’t give a shit. The fact of the matter is we really stuck to our guns defending that explosion and frankly we are in too deep. If you back out of being a boy we will look like assholes!

We’ll only accept this on one condition: you let us throw a gender un-reveal party, with grey smoke. We can even use the same woods! It’s not like anything grows there anymore anyway.