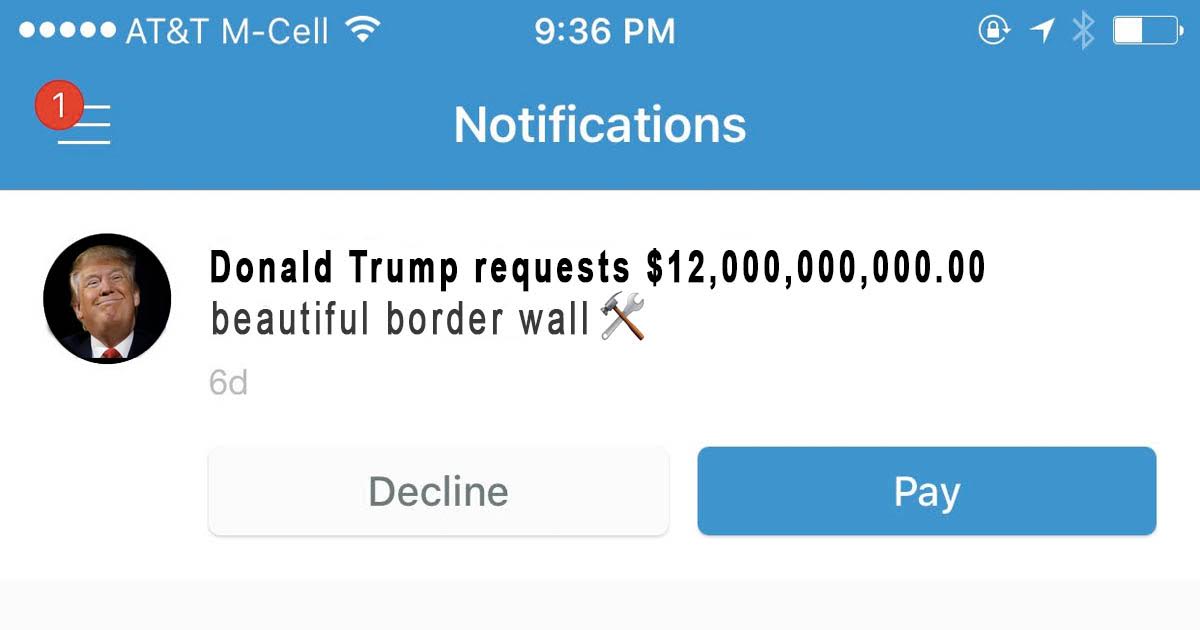 WASHINGTON — A request for funds was sent last night to Mexico’s President Enrique Peña Nieto from the official Venmo account of the United States Department of the Treasury, seeking up-front payment for building a wall on the U.S.-Mexico border. The request, however, has received no response from the Mexican government, according to officials.

“There was a request sent to President Peña Nieto’s personal Venmo account, asking for $12 billion,” confirmed Francisco Guzmán Ortiz, Mexico’s Chief of Staff. “Around 7 a.m. EST, we received a first request that merely said, ‘For wall.’ But that was quickly canceled and replaced with a second request at 7:15 a.m. for the same amount with a U.S. flag emoji, a caution sign emoji, a castle emoji, a second caution sign emoji, and finally a Mexican flag emoji all in the description field. I guess that was supposed to represent the border wall. Needless to say, we ignored it.”

Sources close to President Donald J. Trump report that Mexico’s non-response to the Venmo request led Trump into a temper tantrum at the Oval Office. He called an emergency press conference soon after, blasting Mexican officials for “being such losers about [this] deal.”

“I mean, seriously, folks, we’re gonna build the wall and Mexico’s gonna pay for it — whether it’s through Venmo, through PayPal, or at the very least, by getting us back for something that’s the same price in the future,” said President Trump to a group of carefully chosen, vocal supporters and Breitbart News reporters at his press conference. “I even made sure to make the request for U.S. dollars instead of that terrible Mexican Peso. I was doing them a favor! We have the best dollars, we really do. I travel all around the world doing business deals — we have the number one dollars!”

At press time, tensions between the United States and Mexico were at an all-time high after the Mexican government used their Venmo account to “like” an interaction between President Trump and Russian President Vladimir Putin.