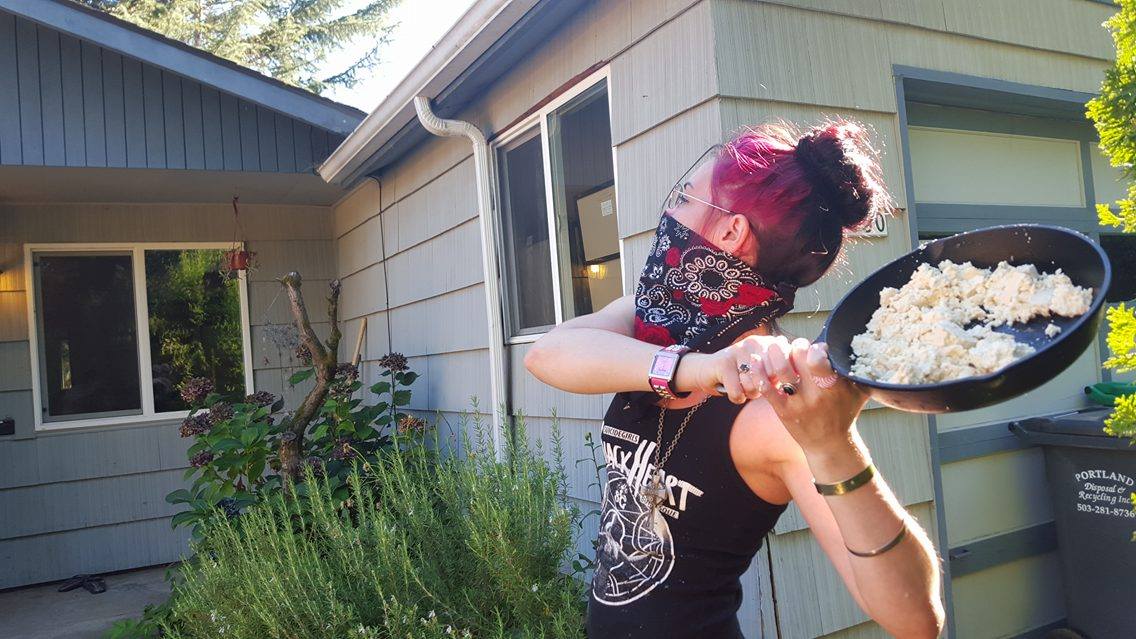 PORTLAND, Ore. – Vegan activist and Grant High School freshman Juniper Wood is facing up to three days of detention for launching a tofu scramble at the house of her principal, according to school records released today.

“I was eating dinner with my family when I heard the splatter against the window,” said Principal James Critchland while wearing a shirt adorned with smiling hamburgers along with a bacon-themed tie which is rumored to be the reason behind the scrambling. “I opened the front door and was hit immediately in the face by a warm, gooey substance. When I tasted some… tofu. No mistaking it. Really, the worst part was the lack of black salt and nutritional yeast. I’ll have to give her my recipe.”

Neighbors report Critchland cleaned the blatant vandalism easily with a brief spray from his hose.

“Yeah, I saw Jim over there spraying his house down, and I yelled over to him, ‘Hey, there, Jim — did the kids get you with them eggs again?’” laughed neighbor Eli Waters. “He just smiled and said, ‘Yeah, something like that.’ One time some paleo kids left a bunch of meat in his mailbox. That was a hoot.”

Wood claimed she was “sickened” by the happiness of the meat patties on Critchland’s shirt.

“Have you ever just, like, looked at a hamburger?” she asked. “They don’t smile. They bleed. They’re dead, just like [Critchland’s] heart. I just hope what I did really hit home. Otherwise, I wasted all of my dinner on that fucker’s house.”

“She handed out pamphlets depicting tortured animals to kids eating lunch,” reported head janitor Tim Darrah. “I didn’t mind all that, but I had to step in when she started chanting, ‘No blood, no fowl!’ and throwing away their chicken nuggets while they ate.”

Wood hinted that, despite her punishment, she may have additional targets in mind.

“Mrs. Stevenson is trying to arrange a field trip to the zoo,” she said. “You know — the prison for animals? If she thinks that’s OK, well… she has another thing coming.”