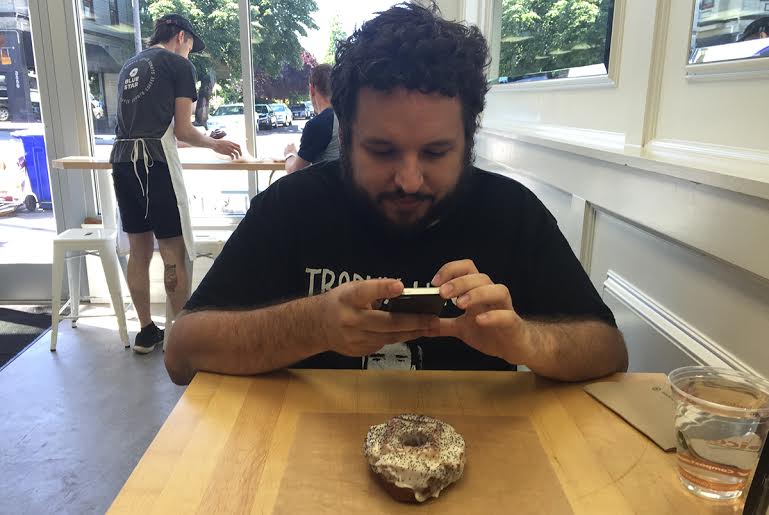 SEATTLE – Residents of the hip Capitol Hill neighborhood of Seattle are lining up daily around the block for treats from The Dough & Nut, the latest artisan donut shop to offer mouth-wateringly overpriced pastries.

Since opening last week, neighbors report hungry customers have frequently queued up overnight for a chance at the day’s batch of fresh donuts, which often sell out before 11 a.m. Each eager patron offered a different reason for what makes Dough & Nut donuts so exciting.

“My main problem with our other donut places was that you could buy a lot of donuts without using very much money – that’s so boring. I can’t wait to throw down five, maybe six bucks on one of these,” related one customer. Another chimed in, “The colorful icing adds some nice contrast when I take selfies.”

A third raved, “I like the gluten-free options made of potato starch and flax seed. It’s like eating oily sand, but so worth it. Blessed.”

Lauren Butler, the owner and self-described “flavor profilist,” attributes The Dough & Nut’s success to understanding what 21st century consumers want. “Special care is given to the store’s graphic design and cashiers are instructed to pre-take a complimentary Instagram photo with each purchase,” she said. “Things have to be fun these days, which is why we name most of our donuts with semi-obscure punk and post-punk music references. My process is: I come up with the name and go from there,” explains Butler.

Butler’s most popular varieties include the cereal-crusted “Iggy Corn Pops,” and the decadent “Morrissey-salted Caramel.” Donut fiends watching their fiber can order a “Bad Brans,” inspired by the genre-busting D.C. band of a similar name.

“The bran donuts taste good, and they’re good for you,” said Butler. “One of our other healthy creations is ‘The Hangover Cure,’ a frosted cake donut sprinkled with crushed aspirin and antacid tablets. The FDA isn’t too happy about that one, to be honest.”

As the store sells the day’s last donut at 10:42 a.m., Butler waxes on what she’s accomplished. “All we started with was some simple ingredients, determination, a million dollars of seed money from my dad, and this building, left over from my failed cupcake bakery. I’m so excited. This is it. Nine dollar donuts are here to stay.”