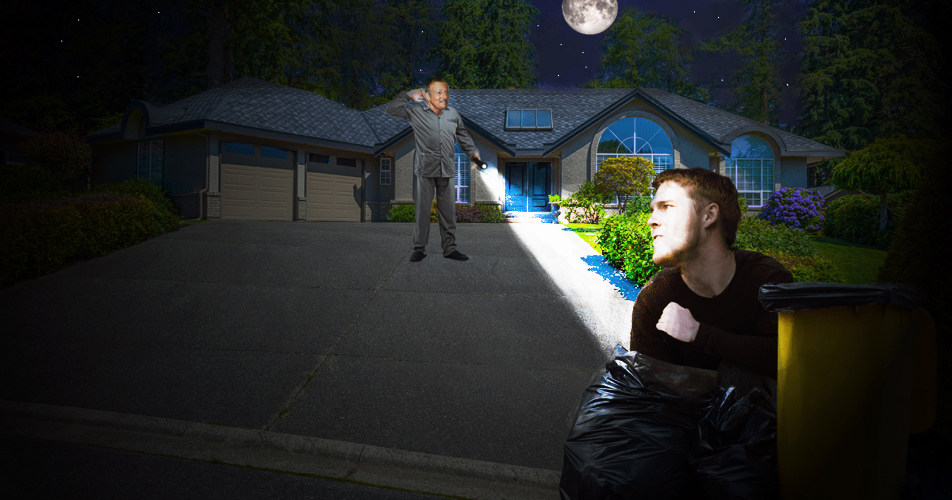 “I sent Bruce down to check out a strange noise I heard outside,” said Patti Scialfa, member of the legendary E-Street Band and Springsteen’s wife of 25 years. “I told him that Fallon boy must be back in town, but he didn’t believe me.”

Though he was skeptical of his wife’s claim, it was proven correct when Springsteen stepped onto his back deck and discovered a startled intruder scurrying away.

“Oh, it was Fallon again alright. No doubt about it,” said Springsteen. “He ran away when he saw me, but I could tell it was him from the white of his t-shirt.”

The couple confirmed this was the first incident in a while, but hardly an isolated one.

“A few years ago, Bruce started doing all his lyrics on his iPad,” said Scialfa. “So he threw out his old notebooks… and someone took them all. Four months later, these guys put out an album called Handwritten. And I swear to god, in the liner notes, he’s wearing an old flannel Bruce threw out because the dog threw up all over it.”

While the allegations have never been completely proven, all signs point to the singer/songwriter.

“He used to come ask me really weird stuff all the time,” said Marty Linderman, head groundskeeper of the Springsteen residence. “Like if I had any ‘personal’ stories about Bruce or anything. I finally told him to get lost one day, and he asked me to ‘tell Maria to meet him under the boardwalk lights’ and ran away. What does that even mean? Was that some kind of code?”

When reached for comment Fallon insisted he has not been rummaging through Mr. Springsteen’s garbage cans at night, explaining that he’s been too busy working on his next solo LP, Junk Mail & Coffee Filters.