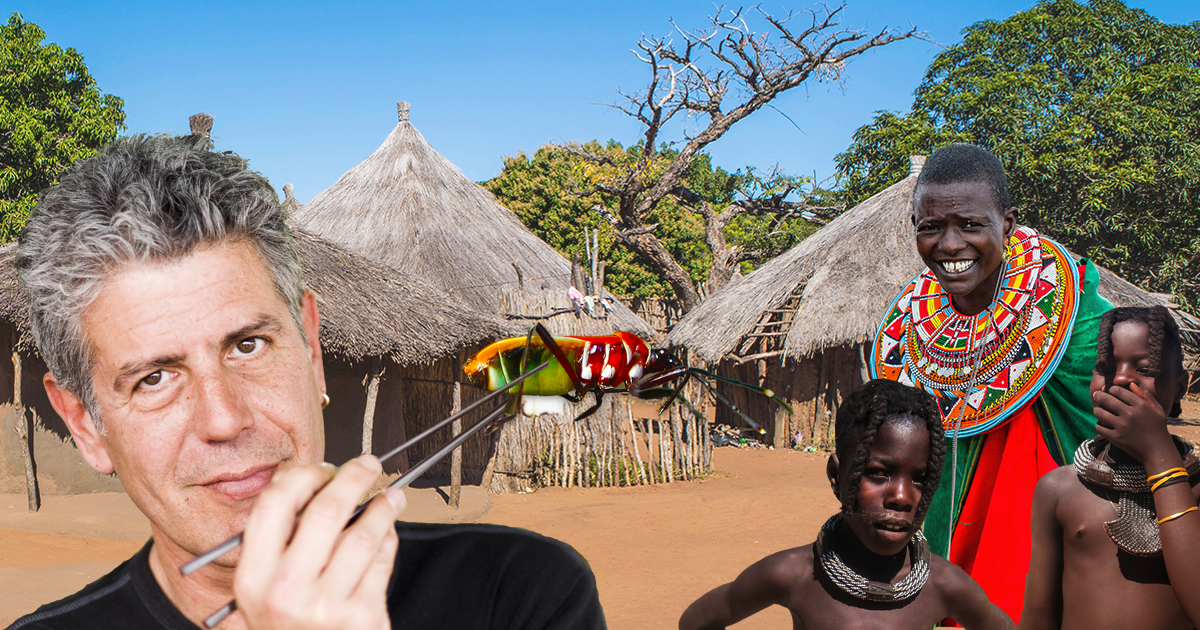 WINDHOEK, Namibia — Travel show host and author Anthony Bourdain ate a wide variety of bugs last week after a Namibian tribe convinced him they “totally eat them, too,” according to skeptical crew members.

Zach Zamboni, Bourdain’s veteran cinematographer, believes the native San tribe of Namibia are “having a laugh at the TV host’s expense,” feeding him any old bugs and animal parts they can find.

“You could see them trying not to laugh the whole time,” Zamboni said. “They’d bring out a plate of live bugs, and of course, Tony digs right in. None of them ate any, though. They kept saying, ‘Oh, I’m so full already. But you go ahead.’”

Boom mic operator Thomas Kelly claimed Bourdain was presented with another helping of bigger, hairier insects immediately after finishing the first round of bugs, along with a boar snout and undercooked entrails. Kelly noted that Bourdain thanked the tribe profusely and ate every bite, giving the “thumbs up” almost the entire time.

“I tried to tell him they were just punking him, but he wasn’t having it,” said Kelly. “He just told me I need to read Naked Lunch and asked if we could clear a Stooges track for the segment. I’ve basically given up.”

Bourdain, who has a reputation for unconditionally accepting food from his hosts, has yet to give a bad review of a home-cooked meal from any origin — a fact that was not lost on the San.

“This white man is a good laugh. He came by a couple years ago, and we told him warthog sphincter was, like, our favorite food. He didn’t even question it,” said one of the elders while chuckling. “If we tell them it’s a great dishonor to turn it down, the tourists eat it every time — never gets old! We told Steve-O and that other guy from Jackass that shoving twigs in their urethras was a sign of fertility and strength, and they actually did it… American TV must be really weird, huh?”