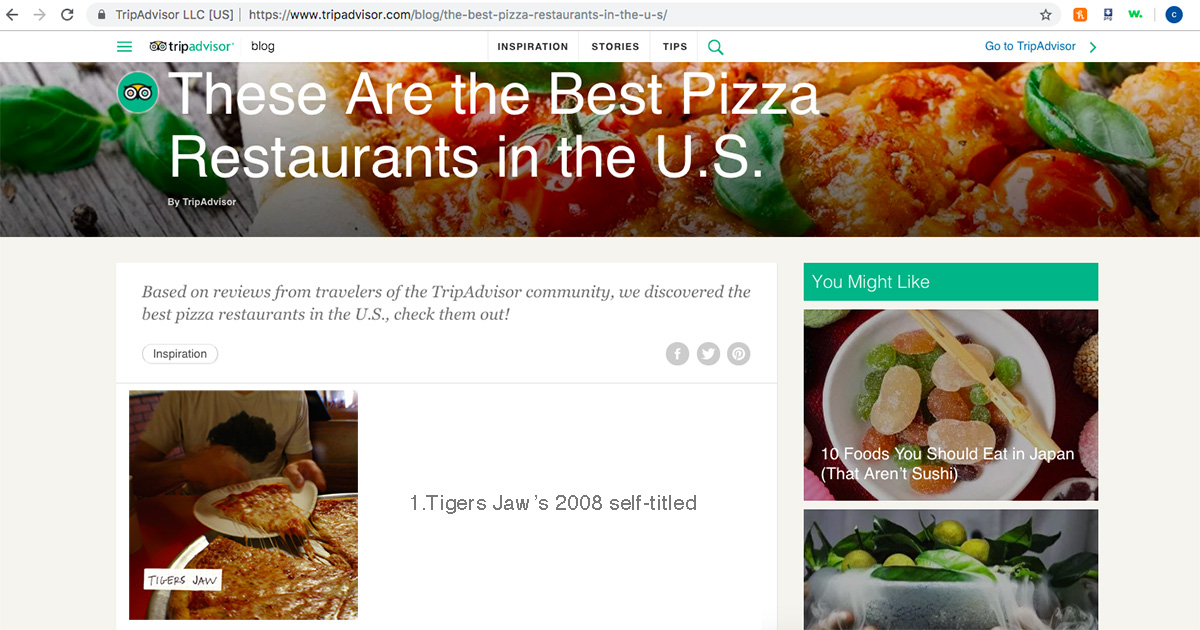 SCRANTON, Penn. — TripAdvisor today named the reissue cover for Tigers Jaw’s 2008 self-titled album as the “Best Pizza” for the ninth year in a row in their annual “15 Best Pizzas in the United States” list.

“I know I can’t literally eat the pizza on the Tigers Jaw cover — and trust me, I’ve printed it out and tried — but nonetheless, no pizza I’ve ever eaten will fill my stomach as much as just that photo does alone. It would be downright dishonest to not have the Tigers Jaw self-titled reissue cover remain at the top of my list for nearly a decade,” TripAdvisor writer Steven Bailey wrote in the list published this morning. “It just looks so goddamn good. From the deep red of the sauce to the stretched cheese coming off the slice being taken, the Tigers Jaw pizza pie is the most filling pizza I’ve ever had.”

Bailey has made a career of travelling to popular pizzerias around the country to taste-test each pie, but continues to search for a slice that tastes as good as the Tigers Jaw album cover looks.

“The chorus rings in the opening track, ‘What about your friends? Do they make you happy?’” Bailey continued in the post. “It’s hard to imagine anyone singing about disliking their friends if they bring along a sweet, sweet pizza like this one with them. I don’t know what it is, but I’m enamored.”

Those close to Bailey, however, believe there is an ulterior motive behind ranking the album art as his top pizza each year.

“Yeah… that album just happened to come out a few days after Bailey’s longtime high school girlfriend cheated on him and dumped him,” said Bailey’s friend Michelle Rogers. “He played that shit nonstop for like, six years, and he’s obviously still not over her. I dunno… the pizza looks good in the photo, but it’s really Jennifer that he keeps putting at the top of his TripAdvisor lists.”

“I like Tigers Jaw, but they’re one of those dime-a-dozen emo bands,” she added. “If Jenn cheated on him a few years later, he’d be putting the kids from the Joyce Manor self-titled album cover at the top of every 10 Cutest Children in America blog or some shit.”

When reached for comment, a representative from Tigers Jaw responded, “What?”