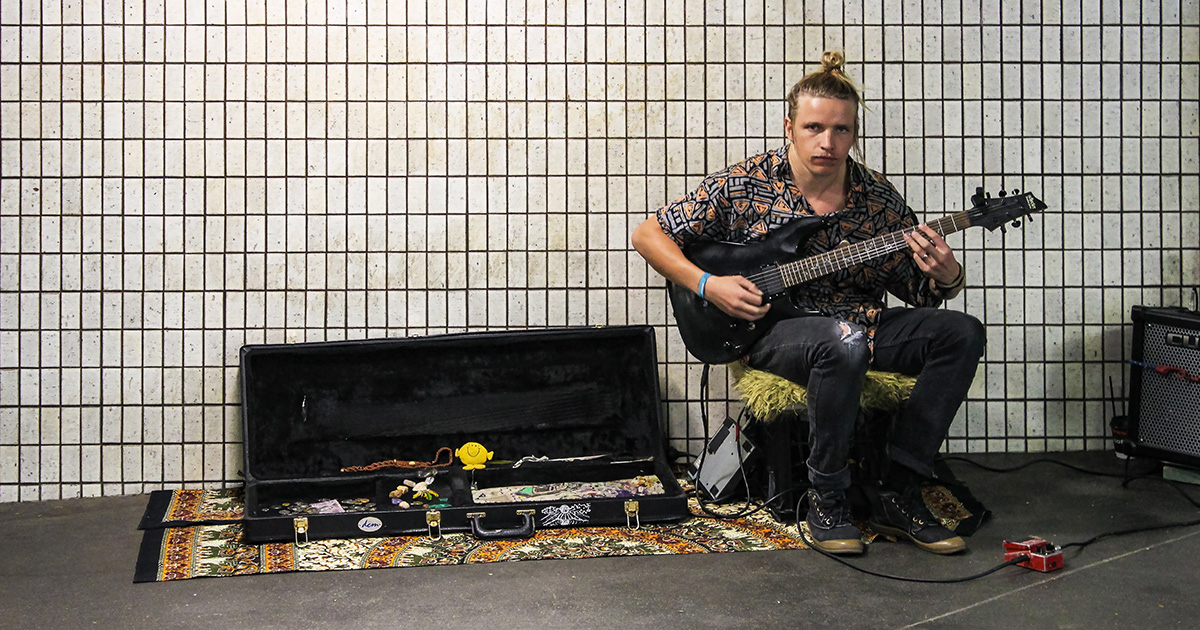 “I was on my way to work this morning, and all I heard was this muffled mess coming from down the stairs,” said commuter Ashley Lyon. “I think he was trying to play a Nirvana song, but his guitar’s tone knob and amp’s treble EQ were all the way down. It sounded like he was underwater. And the vocals were so buried, I’m not even sure his mic was plugged in… if he even had one. I shuffled by him real quick without making eye contact.”

However, Landers, performing at subway stations across New York for years, feels like his raw, unbridled sound is part of what makes him unique.

“I see a lot of other street musicians playing on pristine gear, but I found my trusty Roland Cube one day when I rescued it from some punks trying to light it on fire and throw it off a bridge,” said Landers. “Those kids really did a number on it, but most of the time it works just fine. And, sure, I also haven’t changed my guitar strings in years — because ‘needing’ new strings is just a myth perpetuated by Big Guitar String to get you to keep feeding their greedy pockets. Just like tuners.”

Fortunately for commuters, the Metropolitan Transportation Authority is considering hiring a series of taxpayer-funded street sound guys to help performers sound their best.

“New York has always had a rich tradition of performers doing what they can to make ends meet, but quite frankly, most of them need a little help figuring out how to get the most out of their gear,” said MTA spokesperson Debbie Salazar. “We already tested out a pilot program with Willy ‘Bucket King of Brooklyn’ Henderson, going around to street drummers and providing them with new five gallon buckets. And several Showtime dance crews have been fitted with fog machines to assist with the ambience of their performances — many of whom have already reported an additional $20 per day.”

The MTA is also working on a program to send a series of goons to beat up stand-up comedians who attempt any guerrilla performances on subway platforms.