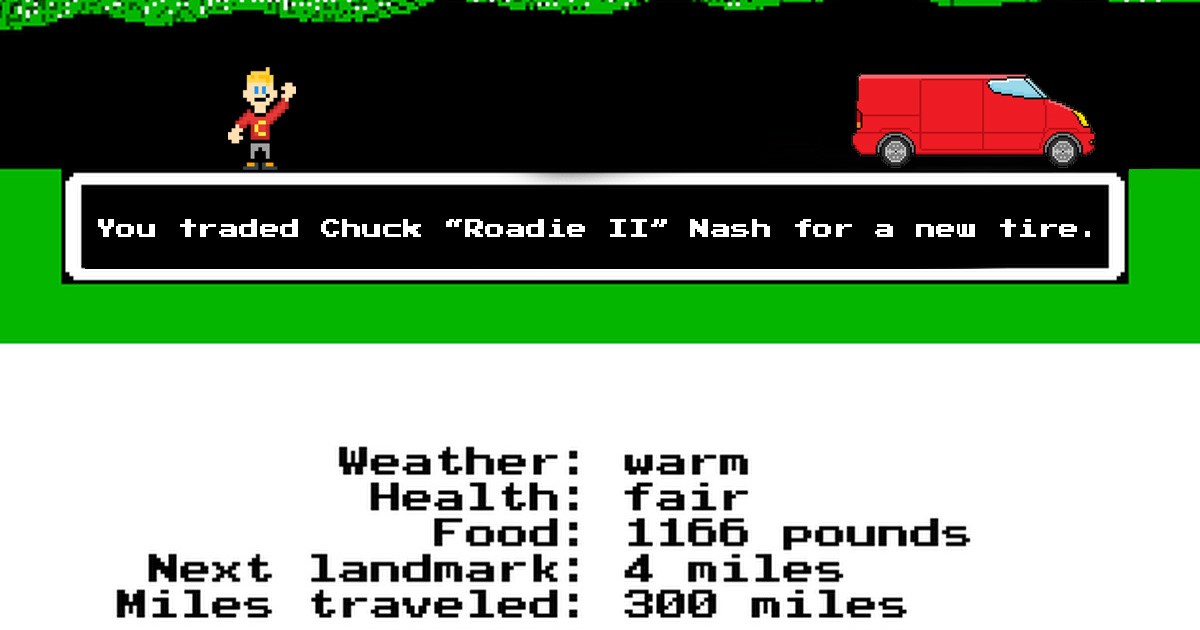 BOISE, Idaho — Touring band Star Monkey traded one of their roadies last night to fellow touring band Tree Destroyer, exchanging him for a new van tire after discovering one of their tires was flat following their set.

“Luckily, we have a bartering system in place with many bands on the road,” noted Star Monkey vocalist Jackie Woodhouse. “We didn’t want to see the roadie go — he’s strong and doesn’t require much food. But sometimes, you just gotta make those hard choices. You try to cross the river with too much weight and the whole thing can just fall right to shit real quick.”

Tree Destroyer’s manager admitted he had to seize the opportunity to improve his band in the short term.

“Winter was hard on us this tour,” remarked manager Otis McDaniels. “We lost our roadie to consumption a couple months back in the snowy plains of Nebraska, and the workload has been a real burden on us all since then. I wish I had [the new roadie] when we were loading in the gear — I was on bass drum duty today. That thing is heavy as fuck.”

The new roadie, Chuck “Roadie II” Nash, was seen holding his post beside the bar during Tree Destroyer’s set.

“Tree Destroyer ain’t so bad once you get to know ‘em,” claimed Nash. “Yessir, I’ve been involved in more than a few trades over my years as a roadie. I try not to take it personally; I just count my lucky stars that I have a roof over my head, a shirt on my back, and food in my belly most times. So all in all, it’s pretty great… so long as I don’t get shipped out with some dipshit banker.”

Star Monkey bassist Reggie Waldron looked back fondly on his time with the old roadie.

“A few weeks back, we were playing somewhere in Wyoming,” said Waldron, “and the roadie was guarding the van after our set, when out of the darkness he was attacked by a gang of junkies trying to steal our gear. He fended them off with nothing but a drumstick and a hi-hat stand. A real hard ass, that one. Good luck to him. I wish I remembered his name.”

Following the show, Star Monkey set to work to change the van’s tire, but quickly remembered that the roadie was the only one who could make the fix.