Promising Mosher Out 3 to 6 Weeks with Torn Vans Sole 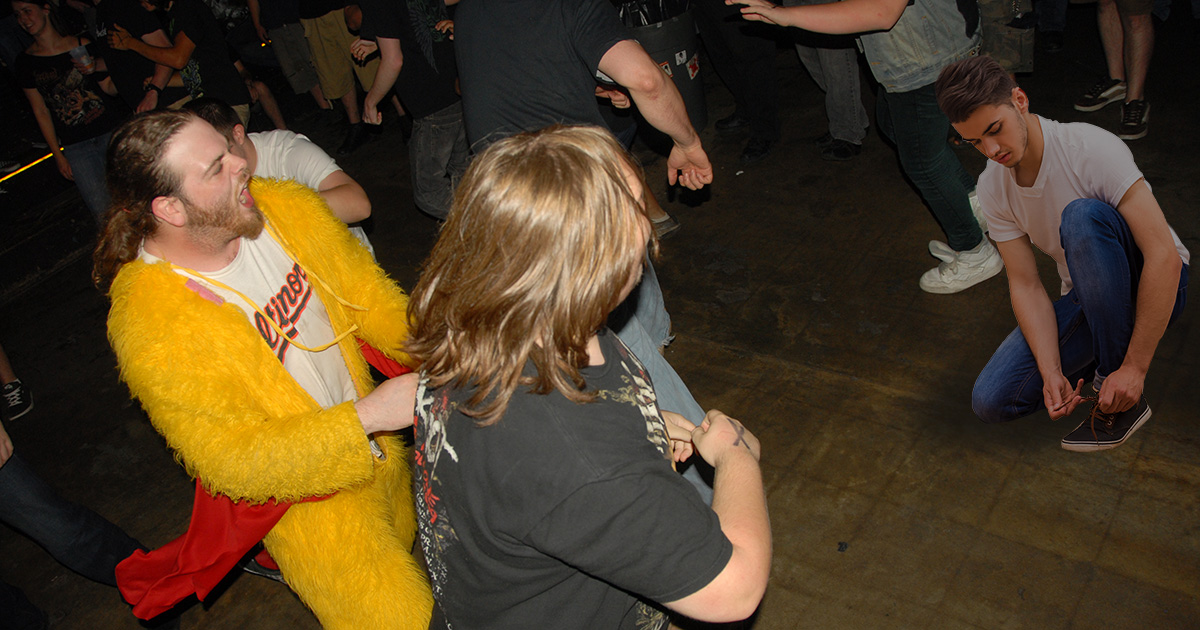 RALEIGH, N.C. — Talented up-and-coming mosher Kurt Scalloway is unable to participate in hardcore activities for roughly one month, after doctors and cobblers confirmed he suffered an acute tear of the sole on his right Vans shoe last week at a church basement show on Kelly Avenue.

“In my time, I haven’t seen a mosher with more potential come through this town,” reported scene veteran Harvey Lergins. “He’s a phenom: he’s got a vertical around 26”, he runs a six- to eight-person deep headwalk, and has a lightning-fast crowd punch. This is a devastating setback, but I know he’ll come back stronger than ever, ready to spin-kick people directly in the neck.”

Scalloway finished the breakdown despite the tear, and even attempted to tape the shoe back together before being ruled unable to continue.

“I talked to his mom, and she’s not buying him a new pair since he already went through three this year,” reported friend Alex Barnini. “Since he’s only been able to get weekend hours bussing at Applebees, it could take as long as four weeks for him to get the extra $60 for another pair of plain canvas, flat-sole shoes.”

Experts are worried that if this proves to be a recurring issue, it could affect Scalloway’s abilities at bigger, more important shows.

“Before this incident, I considered Kurt one of the guys who could make it out of this town, who could get to the festival circuit,” explained venue manager Harry Cripini. “I thought about picking up the cost for his This is Hardcore ticket, just to see that patented windmill land on some Saves the Day kid’s skull. But now, we have no idea what his future holds, or when he can bounce back.”

Scalloway is working with a team of physical therapists to try to perform better in the supportless shoes.

“We’re trying as many techniques as possible to compensate for the complete lack of support in the ball, ankle, and arch of the foot,” noted Scalloway’s podiatrist Dr. Anna Bishop. “We’re trying everything from yoga, to taping ankles, to wearing multiple pairs of socks to increase compression. Though I’m happy to report, we’re achieving a lot of headway with a comically oversized brace held together with nails and wood glue.”

When asked if he could just wear his Converse instead, Scalloway declined comment.