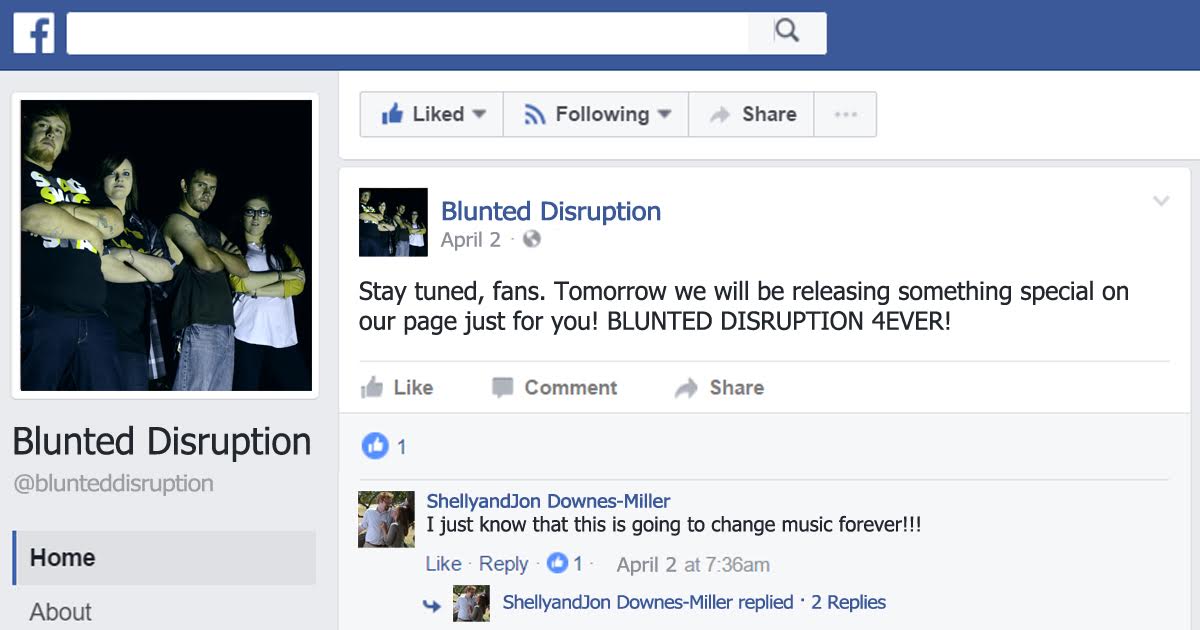 FORT WAYNE, Ind. — Fans of local band Blunted Disruption were thrust into an orgastic frenzy of fevered anticipation this afternoon, as the group informed their 26 Facebook followers that “something special” would be released on their page tomorrow.

“I don’t think they could possibly know how much I needed this,” said longtime fan Sara Collins through joyful sobs. “I’ve just been plowing through ‘today’ for so long. It feels like they’ve given me back ‘tomorrow,’ and it’s a tomorrow with something special in it.”

This was Blunted Disruption’s first Facebook activity since December of last year, when the group updated their influences to include Nirvana, the Ramones, and Radiohead. Previously, band interests included only “playing music and having fun,” with their genre listed simply as “rock.” To date, they have released no material whatsoever.

“That they haven’t recorded a single bit of music is what makes this announcement so exciting,” explained amateur band historian Malik Farzan. “This could be literally anything, because they’ve never really done anything. It’s like discovering the Clash before they made music.”

Plans are underway amongst devoted Blunted Disruption disciples to host “some sort of listening party, or viewing party, or whatever other sort of celebration might be appropriate.” Several fans are reportedly trying to take the day off of work to keep their schedules clear.

“Ever since my mom was injured on the job, I’ve supported her by working at a restaurant downtown … but I’m willing to quit in order to be the first to see this announcement,” said Blunted Disruption superfan Emily Root.

For their part, the band remains humble, crediting all successes and the “something special” to their indefatigable social media fan base of just over two dozen.

“We have a special relationship here,” said frontman Ira Miller, “because we know them all personally. We went to elementary school with at least half of them. They’re friends, they’re family. Every single one of ‘em.”

“I just know this is going to change music forever!!!” predicted commenter ShellyandJon Downes-Miller. “You boys are already something special!! Grandpa wants to know if you’re coming for Easter!?”

At press time, the band was considering spending $5 to boost their post to reach 100+ more people in the greater Fort Wayne area.