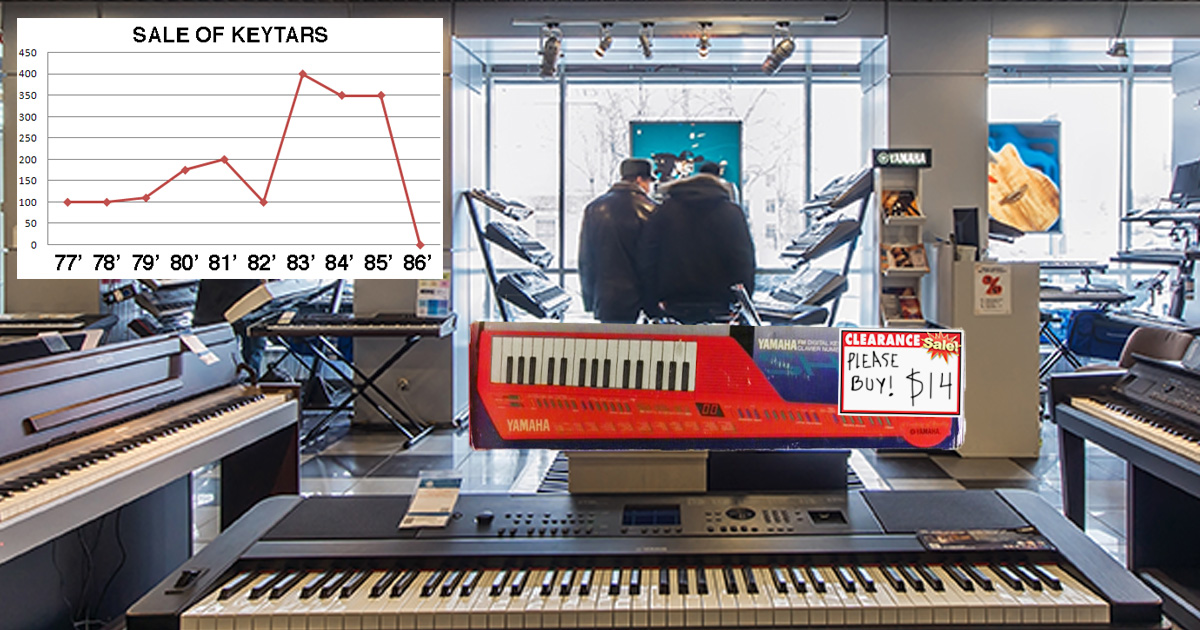 NASHVILLE, Tenn. — Sales of the once-trendy keytar are down for the 425th consecutive month, as markets continue to show complete disinterest in the retro combination instrument, according to a recent report by the International Musical Instrument Retailer Association.

“How could we know that consumers of a novelty instrument would dry up so quickly, and so violently?” asked Danilo Zukas, owner of the struggling keytar warehouse All Key’d Up. “Back in 1983, every man, woman, and child had three or four keytars. Now, my only customers are the occasional Lady Gaga impersonator.”

The keytar craze, spanning from the early ’80s to the slightly later early ’80s, brought strong revenue to instrument retailers around the world. Nowadays, however, Zukas’s warehouse is overflowing with surplus inventory, stacked alongside dusty electronic drum kits, theremins, and didgeridoos.

“Investing millions in what turned out to be a fad was a business decision almost as disastrous as launching Sitar City in 1968,” Zukas lamented, referencing the now-defunct sitar chain. “We stopped doing quarterly earnings reports because they all just basically said ‘zero.’ The best I can hope for now is a Devo tribute band finding some sort of success… and maybe, if I’m lucky, they get their gear stolen a few times a year.”

Unfortunately, it’s not just the brick-and-mortar retailers who are suffering. Traveling keytar salesman Francis Platte has seen his territory reduced from cities like Chicago, Detroit, and Minneapolis, to a small series of neighborhoods in Brooklyn, New York.

“The keytar combines what made the synthesizer a classic — it’s timeless sound — with the best part of playing a guitar — the ability to walk around a bit,” Platte told one potential customer in Williamsburg, Brooklyn. “I think it’s primed for a comeback. A keytar-driven doom metal band — how about that? Or a country band, with a keytar instead of a steel guitar? Now we’re talking!”

However, industry experts are pessimistic about the recovery of an instrument now primarily used as a prop in college-age sketch comedy.

“When it first came out, we had Herbie Hancock, Thomas Dolby, the Miami Vice song guy, and… well, that’s pretty much it, I guess,” said Melissa Kirby, director of the Institute for the Recognition and Preservation of Electronic and Digital Instrumentation Heritage. “The synth-pop revival of the mid-’00s gave some hope, but that came and went pretty quickly. Unless French Canadian New New New Wave catches on, retailers should consider diversifying.”

“But the electronic wind instrument revolution is coming,” she later added. “
You heard it here first.”