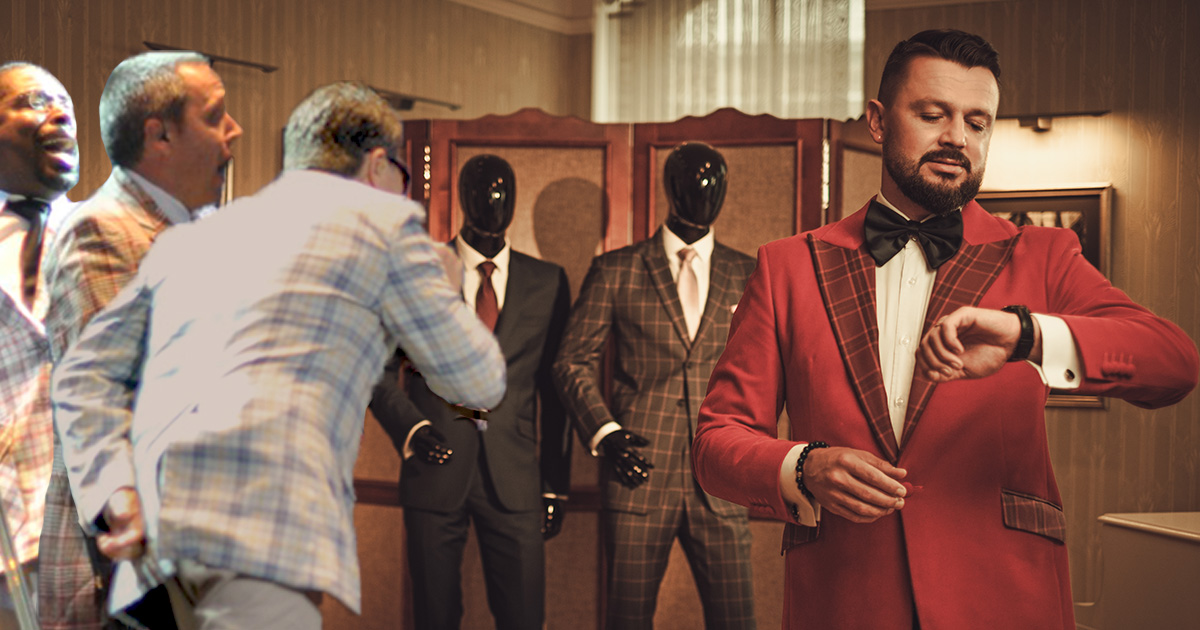 BOSTON — The Measure of a Man Tailor Shop was open long past their normal hours last night thanks to the iconic third-wave ska band The Mighty Mighty Bosstones, who asked to be fitted in custom suits for an upcoming tour just five minutes before closing time.

“Oh, my god… I practically had one foot out the door,” said Marc Morales, an assistant manager who stayed on shift until almost 3 a.m. “I was in the back getting the night’s deposit ready and I heard the bell go off — usually, that’s a solicitor, or someone wanting to use the bathroom. But, no… this time, it was the goddamn Mighty Mighty Bosstones, and all 80 million pieces of their fucking plaid suits.”

Making matters worse, the eight-piece band allegedly “goofed off” when they weren’t being fitted. Between trying on women’s garments, whipping one another with fabric tape measures, and asking to try on hats from shelves more than 20 feet high, witnesses claim they showed no concern for the shop’s standard procedures and decorum.

“They asked if we were open, and I told them we were closing in just a few minutes. If you ask me, that’s a pretty clear hint,” Morales added. “But they all just high-fived and were like, ‘Oh, cool, we made it!’ They really didn’t have a clue. Some people have clearly never worked retail in their lives.”

The Bosstones have searched for a new, “in-house” tailor since the on-the-job passing of their longtime wardrobe stylist Lonny “Stitches” Robison last year. And despite repeated attempts to decline the offer, the band believes they’ve found their man in Morales.

“Marc called me in a panic, asking if he ‘absolutely, 100 percent had’ to help these guys,” said Measure of a Man owner Mel Bentley. “We pay our bills with prom rentals — there’s no way in hell he’s gonna turn down a sale like that.”

Morales reportedly finished measuring every member of the skacore pioneers and closed the store only a couple of hours before sunrise — displeasure that did not go unnoticed by vocalist Dicky Barrett.

“Boy, that guy did not like us,” said Barrett. “But, hey — I get it, and I totally understand. Ska music just isn’t for everybody.”