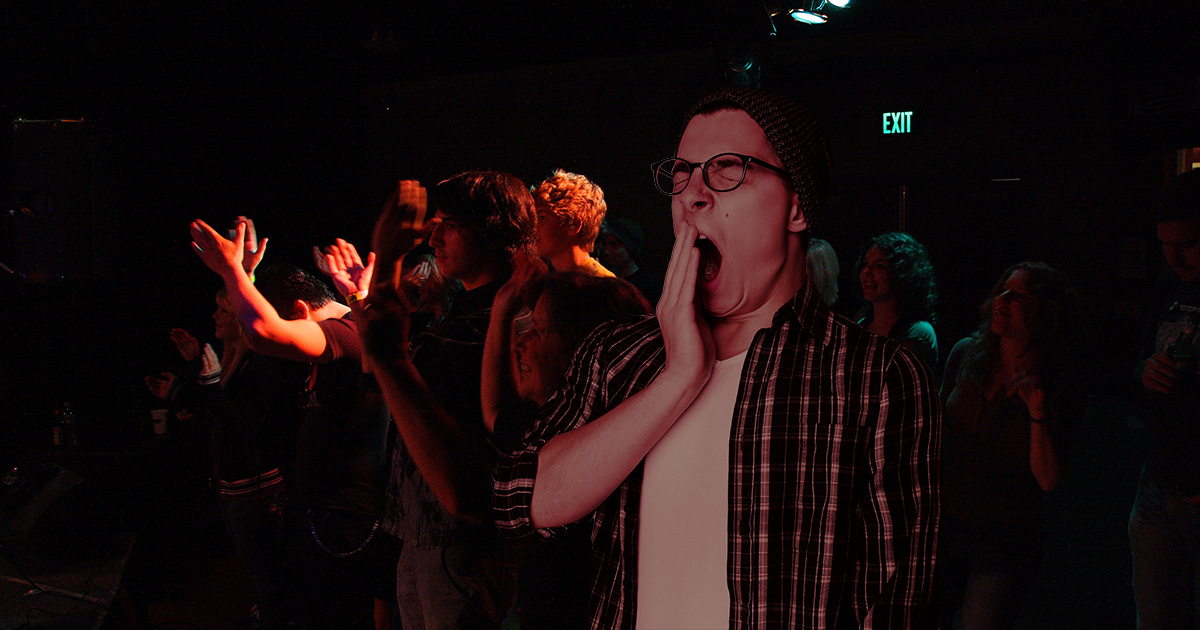 “I couldn’t get lost in the beats because I found myself pulling up GRE apps on my phone, even though I took the test over six months ago,” said Davidson. “At one point, I opened up Spotify to press the skip button, because I thought the J-Dilla sample was too distracting to study to… but then I remembered I’m at a live concert, and I don’t have anything to study for.”

Davidson’s friends attested to his restlessness, insinuating that his attempts to resist the urge to “hit the books” killed the entire vibe of the night.

“I don’t get why he couldn’t just enjoy the lo-fi piano riffs and synth reverbs like the rest of us,” said Davidson’s friend Trisha Gray. “There were even a few times I caught him jotting down equations on a napkin, then saying, ‘Wait… fuck,’ and putting it away.”

Davidson admitted he even found himself employing relaxation techniques concurrent with his nightly chillhop listening.

“When they whipped out the flute during the first track, I had to stop myself from performing deep breathing exercises and imagining waves crashing on a beach,” Davidson said. “The sampled fuzzy droplets of rain almost gave me a panic attack, just so I could self soothe it, by force of habit.”

Davidson was not alone, however: bystanders claimed fellow concert-goer and chillhop aficionado Melissa Berkin also struggled to resist the urge to catch up on required reading at the show.

“I didn’t even know the girl, and she kept asking if I knew how to get to a library that had good books on women’s studies,” said fellow showgoer Sage Melowski. “And she had what I thought was a really old phone… but it was actually a graphing calculator. It was wild, man. The girl had zero chill — she really needed a spliff or something.”

At press time, Davidson had instigated various arguments with his girlfriend and paid for an online French course to undergo, all so he can relax and study while smoking weed and listening to his “legit chill” playlist.