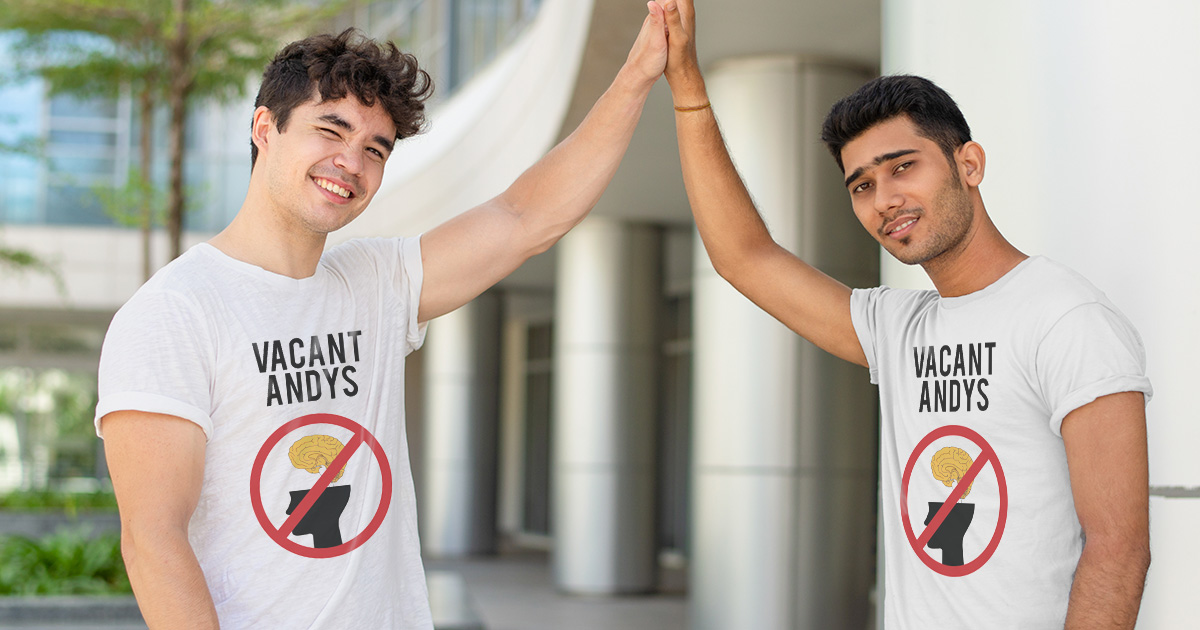 NANUET, N.Y. — Local new, potential best friends Mark Hughes and Brady Walker confirmed that they shared the most beautiful moment of their respective lives yesterday after passing each other on a sidewalk and noticing they were wearing the same obscure band T-shirt.

“It was glorious — walking to the subway, I passed this dude in a Vacant Andys T-shirt… while I was wearing the same exact fucking shirt. Like, who even knows the Vacant Andys?” gushed Hughes. “I looked up from my phone, saw the shirt, and stared into the eyes that truly brought me into heaven on Earth. It was better than my wedding day and the birth of my children, combined!”

“I knew we’d just shared this beautiful moment, but I was terrified to try to actually speak to him. I didn’t want my flawed humanity to ruin something that can only be described as ‘divine,’” Walker commented, his eyes welling with tears. “I’m so glad he said something first… otherwise, I’d just imagine forever what could have been with ‘mystery T-shirt dude.’”

“Making new friends in your 30s is one of the most difficult things I’ve ever had to do in my life,” he added, “so this was a nice respite.”

However, the duo’s respective families seemed surprised by their newfound, lifelong bond.

“Wow, Mark said wearing the same band T-shirt as some stranger is his meet-cute?” asked Hughes’ wife, Anna. “Because we met at our company’s Christmas party, when I accidentally slipped and fell into his arms, and made him spill his drink, and we had to go find a dryer for my sweater in the middle of the night… and then he later found my phone randomly and returned it to me after I texted it and we chatted a little, which was all before we were paired up to walk down the aisle at a mutual friend’s wedding and then got set up on a blind date by different mutual friends. But, sure: the T-shirt thing is the meet-cute. Sure.”

When reached for comment the ex-lead singer of The Vacant Andys, simply responded, “Yeah, I get it… I’ve been responsible for a lot of special relationships.”