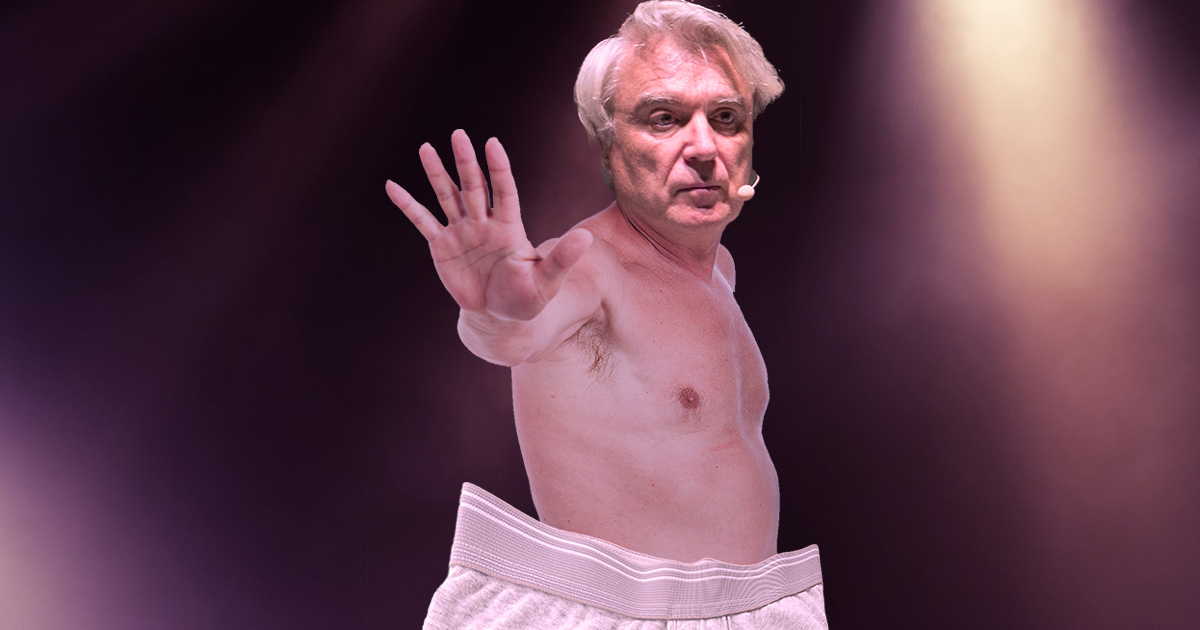 NEW YORK — Legendary Talking Heads frontman David Byrne awoke full of terror last night when he once again dreamed he was performing in only his trademark giant suit’s giant underwear, confirmed sources who are tired of hearing about the recurring nightmare.

“I’ve had the nightmare about once a week since we filmed ‘Stop Making Sense;” said Byrne while wiping the sweat from his brow. “I’m up there, in front of all those people and cameras, about to launch into ‘Girlfriend is Better’ as I always would. But then, I look down, and I’m totally nude…save for a pair of briefs that would fit loose on a hippopotamus. I look out in the crowd and everyone is pointing and laughing because this underwear really makes me look goofy, and nobody likes a goofy rockstar.”

“Oh yes, see, he’d wake up bug-eyed, twitchy, yelping and wiggling, spouting off cryptic zen koans, strange lyrics, and these, just, aggressively odd ideas about the world around him,” said Lutz. “But then, on the mornings after he had the nightmare, he’d be an absolute wreck and could only talk about the most boring subjects like tax preparation and joining a bowling league. The mind can often be a prison, and David’s subconscious thoughts are an unforgiving warden.”

Celebrity dream analyst Maya Winskoff professed that a recurring fashion-based nightmare is not uncommon for musicians of Byrne’s distinguished tenure.

“In my research, I’ve found many cases of acclaimed new wave artists having their various stresses manifesting in nightmares about their clothing,” said Winskoff. “In addition to David’s underwear dream, Devo’s Mark Mothersbaugh often avoids sleep altogether because of his ever-present night terrors where he and the other Devo members show up to a party wearing the exact different outfits.”

“Music is not just an aural medium, these artists care deeply about how they’re being represented visually,” Winskoff added. “I mean, can you picture David Byrne in Kohl’s khakis? Talk about a nightmare.”

When asked why such a well-respected and influential musician would be so rattled at the prospect of performing in a giant pair of briefs, Byrne stated simply “Oh, because I usually wear giant boxer shorts.”