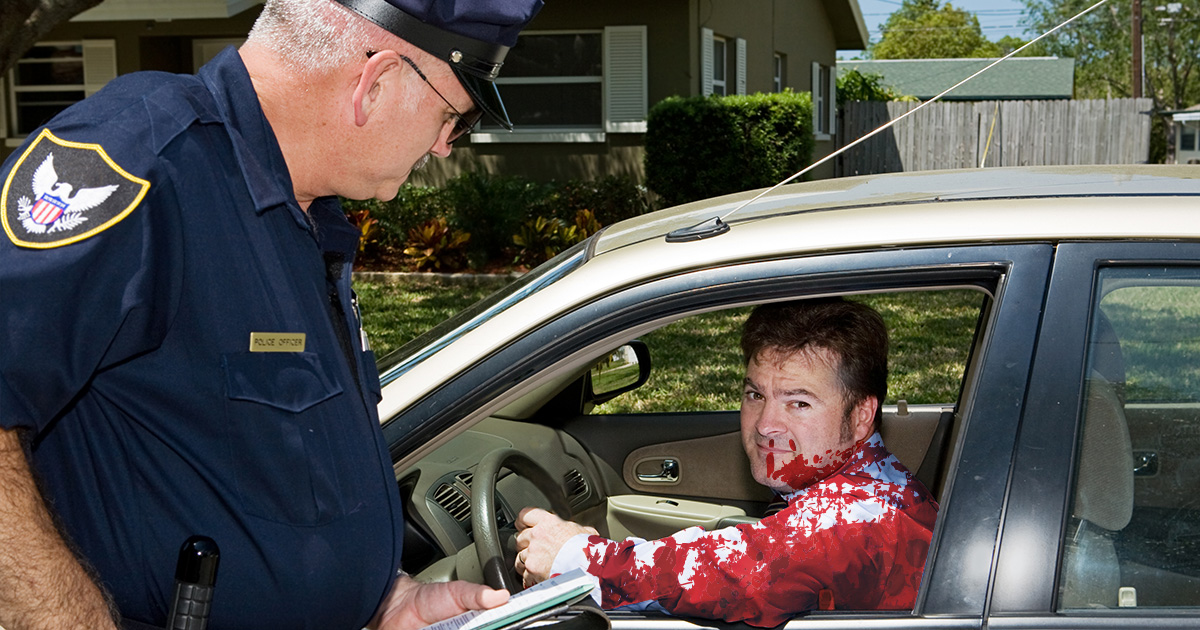 BALTIMORE — Local metalhead Matt Franklin attempted to convince a police officer that the blood and bodily fluids covering his body were due to the fact he was returning home from a particularly messy GWAR show, dispatch confirmed.

“Okay, I know how this looks, but hear me out. All this red stuff is not my victim’s blood, but rather that of a Confederate soldier reanimated by the band of interplanetary barbarians known as GWAR,” pleaded an uneasy Franklin. “So, long story short, this group of good-for-nothing Scumdogs was sent by the Master billions of years ago to conquer Earth. But, they got frozen in Antarctica, addicted to crack, and distracted by rock ‘n’ roll. And, uh, tonight, they brought Vladimir Putin out on stage – because he’s stealing their job of killing innocents – and ripped the skin off his face, which completely covered me in blood. So as you can see, this is all a big misunderstanding.”

Officer Dale Focht, who stopped Franklin for a broken tail light, was visibly stunned by the explanation of intergalactic conquerors which lead to the man getting covered in alien semen and viscera.

“Well, he claimed some kind of monster with four penises, er, enjoyed himself all over a room full of people,” said a skeptical Focht, “And that a character named ‘ballsack’ fed several ‘whores’ to a ‘world maggot.’ I figured it was best if I took him back to the station to sober up from whatever substance he was on and check if there were any missing persons reported tonight. You’d be surprised how often I get these nutcases, and how often they’re blasting terrible music when I pull them over.”

Lead howler of GWAR, Blothar the Berserker, was enraged by Franklin’s choice to submit so easily to a flimsy human cop.

“One of our slaves was apparently taken by a scum-sucking member of the Earth police. Well, why didn’t he just kill the cop and get on with it?” cried an incredulous Blothar. “That’s what Blothar–I mean I– would’ve done. I mean, Blothar, for not me personally, in case this is on the record. But regardless, this man is a pansy and a coward, and we do not forgive him of his transgression.”

Franklin was last spotted attempting to explain the life, times, and crimes of Oderus Urungus to an exhausted lieutenant of the police department before being committed to a local hospital for a mandatory 72-hour psychiatric hold.