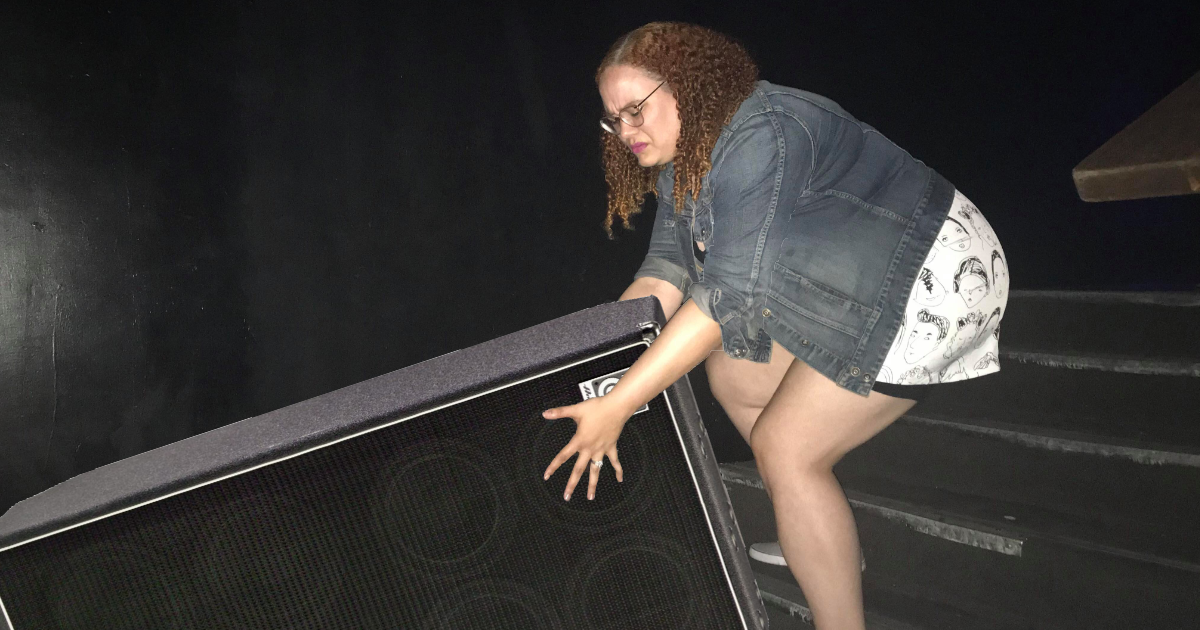 PHILADELPHIA — Local bass player Katie Martinez wished last night that she hadn’t tried to make a feminist statement about the strength of women by carrying a 76-pound bass cab up a flight of stairs by herself, according to eyewitnesses.

“It’s my amp and I fucking shred with it, so I can carry it by myself!” declared a sweaty Martinez. “If you think Tina fucking Weymouth needed help to… sorry… fuck. It’s not that I can’t take the weight, it’s just shaped weird.”

Bandmate Trey Arias followed Martinez, carrying the speaker cable and a T-shirt from the merch table — which she occasionally allowed him to use to dab her brow.

“I tried to help her carry it — normally we treat that as a two person job anyway,” explained Arias. “But she told me I was acting like a fuckboi and only letting her carry 80.5 percent when she deserved the full 100. I support her point or whatever, but I just really needed to use the bathroom, and it was impossible to get by her. Pretty annoying.”

On step 12 of the flight of stairs, discovering she had four steps left, Martinez tried to stop for a breather but was interrupted by a young fan heading up the stairs.

“I was like, ‘Fuck yeah, girl power!’” proclaimed aspiring bassist and teenager Cindy Dumont, raising a fist in solidarity toward an exhausted Martinez, whose arms were trembling violently. “I bet she would have raised her fist back if her elbows weren’t so obviously hyperextended.”

Venue manager Von Simmons confirmed he ran into Martinez on the landing as he stepped off the elevator.

“I realized I forgot to tell her about the elevator because I was showing the other guys my glow-in-the-dark drumsticks, but when I started to mention it, she just dropped the cab on my foot,” Simmons recalls. “She said it was an accident, but then walked away without picking it up. Last I saw her she was yelling something about ‘Broad City’ or something.”