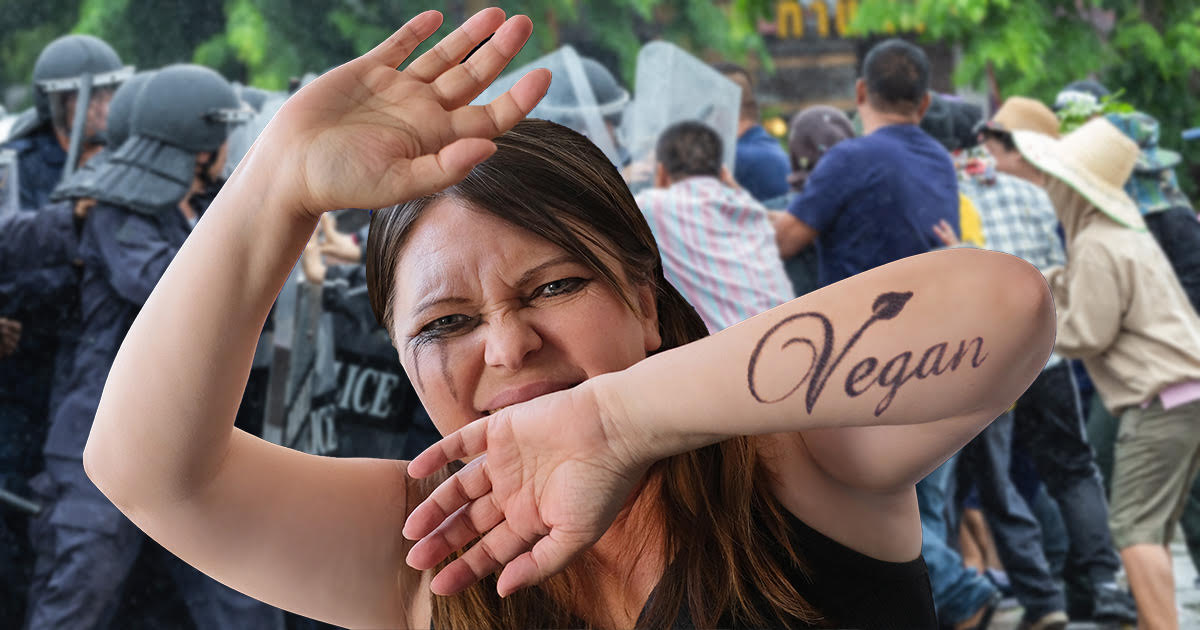 PHILADELPHIA — Local vegan Courtney Demming was pepper-sprayed by Philadelphia police during a peaceful protest yesterday, but declined the offer of a “milk wash” to curb the spray’s effects, multiple on-site medics confirm.

“These pigs in blue are the only animals I won’t defend,” said Demming while trying to use her T-shirt to blot her eyes. “I’m not a fucking baby cow — I don’t need milk to ‘strengthen my bones’ or ‘help wash away a blinding irritant.’ That’s just Big Dairy propaganda. No, thanks.”

“Besides, the amount of pus in one gallon of milk is far worse than the pain from the pepper spray,” she added through tears. “It’s unacceptable that there aren’t any non-dairy options for those of us who refuse to participate in animal cruelty. Oat milk works just as well, probably.”

Mutual aid workers insisted they were only trying to help.

“I don’t know, man. I just kind of reacted,” said volunteer medic Erik Oseto. “We weren’t trying to insult her, or devalue her belief system — we just saw those cops empty an entire can of pepper spray directly in her face while she was sitting cross legged on the ground, and wanted to help relieve her pain. But the second we opened the bottle of milk, it was like she forgot about her eyes — she really laid into us about the level of cruelty that went into producing the milk itself. She even had some pamphlets in her backpack. She came prepared.”

While this wave of civil unrest and police violence in America has disrupted many lives, there are some who see this as a positive.

“I love the ongoing protests. We’ve never been more profitable,” said Dairy Farmers of America CEO Richard Smith. “With all these vegan alternatives gaining popularity, the dairy industry was seeing a huge decrease in sales… that was, until these cops started going ham. It’s really saved our asses. We’ve even started supplying some precincts with more pepper spray to increase demand for more milk. We’re doing what we gotta do to stay afloat just like everyone else.”

Demming is now developing her own “Jackass”-style YouTube show, testing different milk alternatives as remedies for the pain.