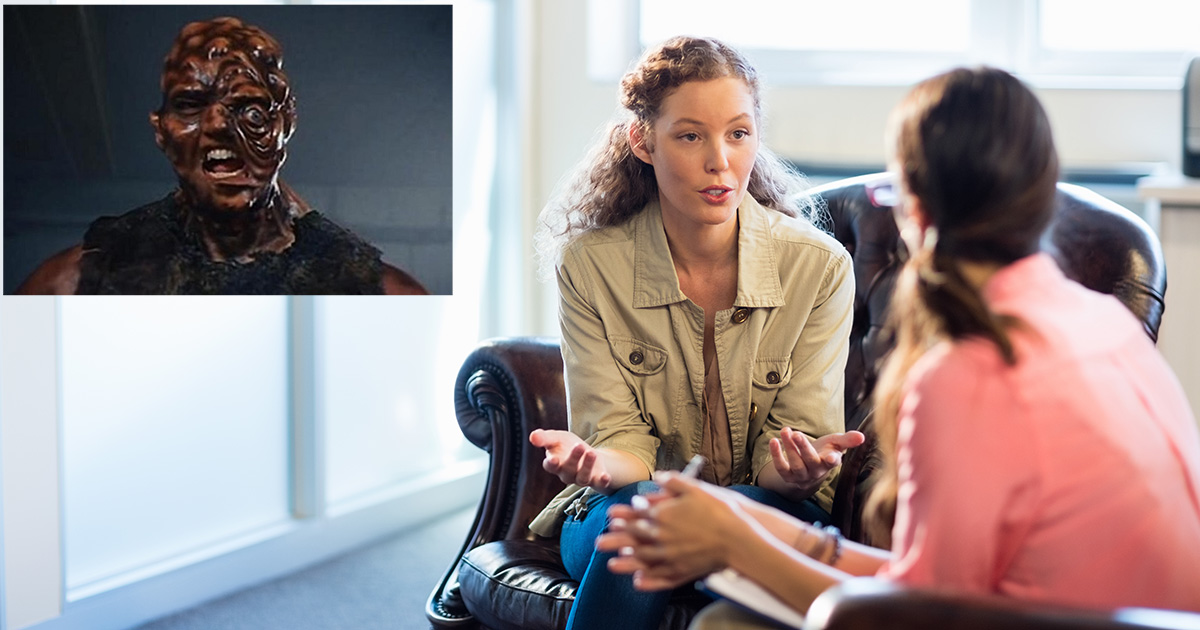 TROMAVILLE, N.J. — Local woman Daisy Oliynyk finally realized yesterday following a breakthrough in therapy that she is in a relationship with the Toxic Avenger, sources gently pushing a box of tissues toward the center of a table confirmed.

“Something’s been off with me for a while, but I couldn’t quite put my finger on it. My friends have all been trying to tell me that my boyfriend is toxic… but I just wasn’t able to see that they meant he literally fell into a pool of nuclear slime until my last session,” Oliynyk stated. “Then suddenly, it all made sense — the badly deformed face, the superhuman strength he developed overnight, all of the violent revenge killing he does in alleyways and fitness centers… God, it really is crazy just how much good dick will totally blind you to the truth that’s right in front of you. I feel so foolish.”

Oliynyk’s therapist, Dr. Jean Brasser, credits her client’s breakthrough to ongoing work, as well as analyzing photos of her partner before and after his chemical accident.

“I’ve been working with Daisy for nearly a year now, and we’ve mostly covered patterns in her relationships and how that may contribute to her underachieving financially. I’ve also been really encouraging her to take a look at how she’s dating an actual monster,” Dr. Brasser explained. “At one point I even printed out a photo of a barrel of toxic waste, pretended the before photo fell into it, and then had the after photo come out the other side, but she kept asking if this was a metaphor for the time her mom wouldn’t let her go on some camping trip. It’s been a process.”

Mental health experts confirm that denial and deflection are common traits when involved in relationships with the Toxic Avenger.

“Oftentimes, denial is used as armor to protect a person from facing truths they simply can’t bear,” said clinical psychologist Dr. Amanda Choi. “This is especially true for people in Toxic Avenger partnerships, who can often be seen idealizing his penchant for justice and entirely ignoring the weird mop he carries with him everywhere. Regardless, he’s still more emotionally mature and available than the majority of straight men, so all in all, it’s not the worst thing a person could waste their early 30s on.”

When reached for comment, the Toxic Avenger grunted incoherently and shook dust off of his badly burned tutu.