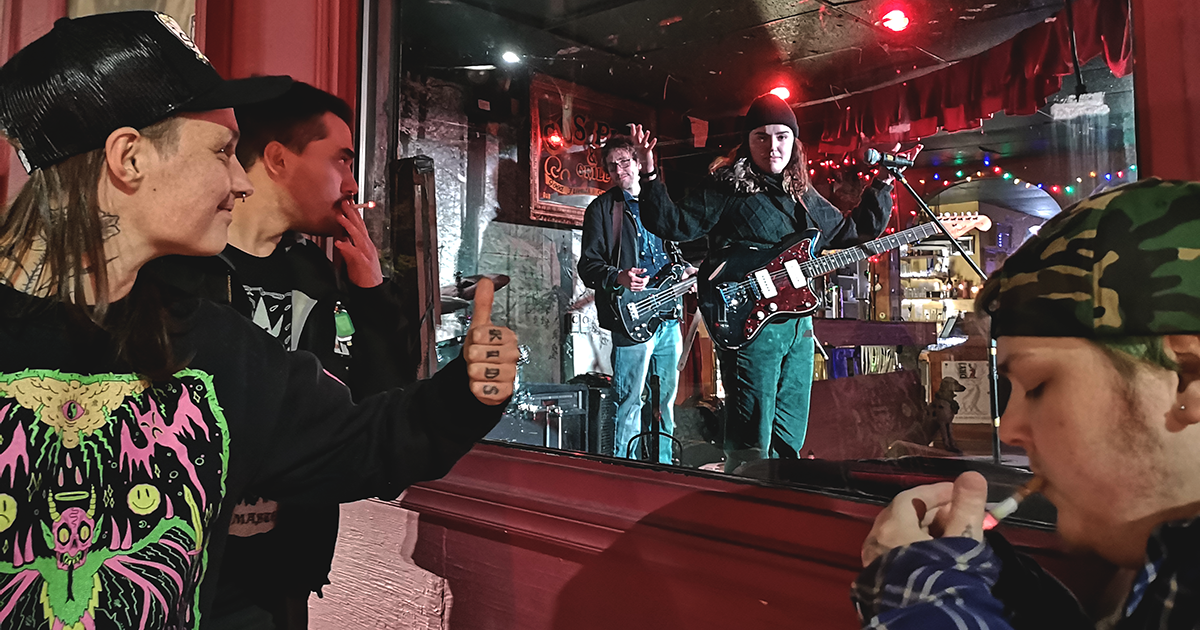 HALIFAX, N.S. — Local band Goblin Fist allegedly sounded just as good last night to the smokers outside the venue as it would if they were inside actually watching the band’s set, relaxed sources report.

“I’ve been smoking outside of Goblin Fist gigs for years, and they always put on one hell of a show from what I can tell,” said fan Sandy Gallant, lighting a cigarette from the ember of another. “I paid the cover and grabbed a few shots during setup, so I’m still supporting the band from out here.”

The garage-rock trio finished their set to an empty bar and applause from the sidewalk outside of Frank’s Pub, a popular venue in the city.

“This venue is the best spot to stand outside and smoke and talk to people while bands are playing. People line the windows to catch their local faves almost every night,” according to local band avoider and Yelp Elite reviewer Carrie Wade. “You can hear half of the drums super clearly from outdoors, some of the bass, and most of what the singer is saying between songs if they have a high-pitched voice. Plus, people can smoke as much as they want, and even reef on a joint if they’re smart about it. It really is the best of both worlds.”

While most attendees stayed outdoors, some fans actually preferred to remain inside the pub during the show.

“It’s super rude that people leave during the band’s set… and dumb, too, since the bathroom provides the best sound clarity in the entire building. And there’s always ice in the urinal to help keep your drink cold,” stated longtime fan Matty Pineo. “Plus, I can vape like a motherfucker in here no prob. The third stall has the best acoustics, if you ask me.”

Toward the end of the show, merch guy Jeremy Loeb moved the T-shirt table onto the sidewalk in an attempt to boost sales.

“Apparently this is the spot to be if you want to sell a goddamn T-shirt,” said Loeb, counting the band’s float amid a heavy cloud of smoke. “So far, the only person to come to the table was some guy who asked if I could spare any change. So we’re actually down a loonie. Christ, it’s cold out here!”

At press time, showgoers were leaving the gig to drink outside of the midnight premiere of their friend’s new film.