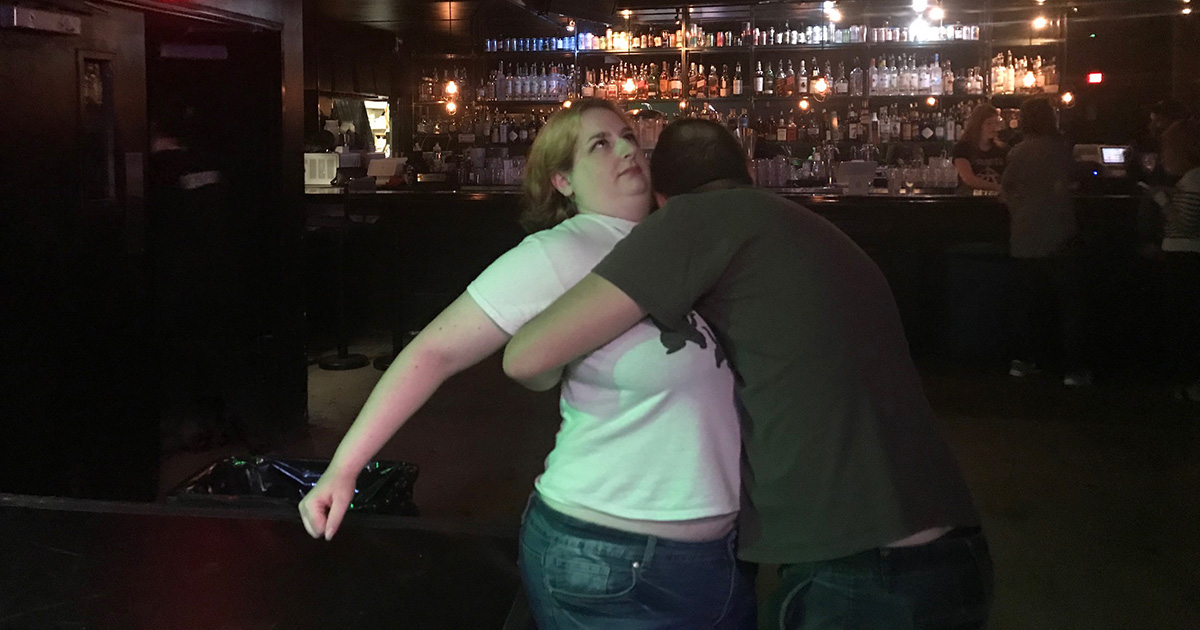 DETROIT — Local punk Leslie Knight is currently trapped in what she thought was going to be a friendly “hello” with a guy whose hug is lasting an uncomfortably long time, according to multiple eyewitnesses.

“I’ve tried all the basics — I did the three-pat thing, where I signaled the end of the hug with a few taps on his back,” said Knight. “And then I did the obvious pulling-my-neck-away to sort of pry myself out of the hug… but he just yanked me right back into his vice-like grip. My neck is starting to cramp. I think I’m getting dehydrated.”

Witnesses confirm the hug everyone can clearly see should’ve been over one second after it began still isn’t, for some reason.

“You could tell as soon as he opened his arms wide for a hug that she just wasn’t into it,” said David Warden, the door guy at The Whiskey Dick. “The weird thing was, he gave her boyfriend a handshake. Why do dudes do shit like that?”

Behavioral psychologist Nicolette Orbison offered some insight into why one may act this way.

“Well, Freud would have you think this fella really wants to boff his mom,” said Orbison. “I don’t subscribe to Freud’s thinking so much, personally. Of course, the field of psychology still has only a loose understanding of what drives a person to this — there are many mysteries still yet to be uncovered. Schooling aside, If I’m speaking candidly, I think he’s probably just a creepy weirdo.”

Many local women attest this isn’t the first offense from hugger Chad Baker.

“Oh, gosh, that guy? I once missed all of the opening bands at a concert because I bumped into him at the venue’s entrance,” said Wayne County resident Allie Lehrman. “Now whenever I see him somewhere, I just pick up everything in sight. Can’t trap me in a hug if my hands are full of a buncha shit.”

At press time, the local fire department was entering The Whiskey Dick to utilize the jaws of life to free Knight from the hug just as Baker’s hand found a resting spot on Knight’s lower back.