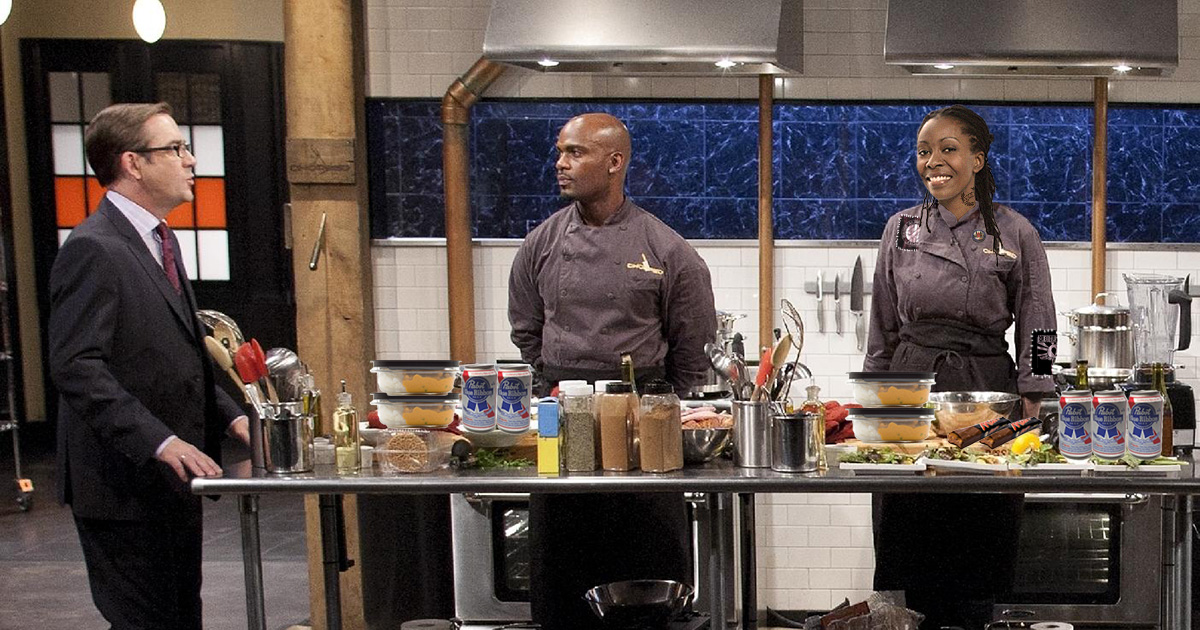 LOS ANGELES — Sacramento-based punk and local chef Tina “Snot” McLain won the dinner round of the hit cooking show “Chopped” last night with a casserole made from a chocolate bar, leftover pasta, and a room-temperature can of cheap beer.

“I made this every weekend back when I lived at The Shithouse,” said McLain of her winning dish. “Bands would play in our basement and I’d make it for them after the gig. We lived across the road from an Italian restaurant, so there was always tons of macaroni in their dumpster. And raccoons.”

“I hope I can pull it off in the dessert round. As it stands, I might have to move back into The Shithouse, but with a win I could move into a place that hasn’t been condemned by the city,” McLain added. “A place with actual curtains, and a toilet that flushes most of the time.”

While McLain was well within her wheelhouse with her secret basket ingredients, other contestants ranged from confused to disgusted.

“I’d seen some weird ingredients on ‘Chopped’ before, but nothing like this,” said fellow contestant Connie Rodgers, a Michelin Star chef from Denver. “I was prepared for something weird like frog legs… but a single, warm beer? Mine had a cigarette butt in it. I was still able to whip up a decent pasta fagioli, thanks to the weird onion smell on this cutoff denim jacket I found on one of the seats, but it wasn’t enough to win the round.”

For her part, “Chopped” judge Alex Guarnaschelli was particularly impressed by the dish.

“Using the Mars Bar to make a chocolate molé sauce was ingenious. And don’t get me started on that exquisite PBR glaze,” said Guarnaschelli. “She kept the comfort-food charm of the mac n’ cheese but mixed it with these left-field flairs. I was incredibly impressed with Chef McLain. I just wish she’d stop drinking the cooking wine.”

At press time, all three “Chopped” judges from the episode were hospitalized with food poisoning, and McLain will be stripped of her winnings as soon as someone can locate her.