Punk More Merch Than Man at This Point 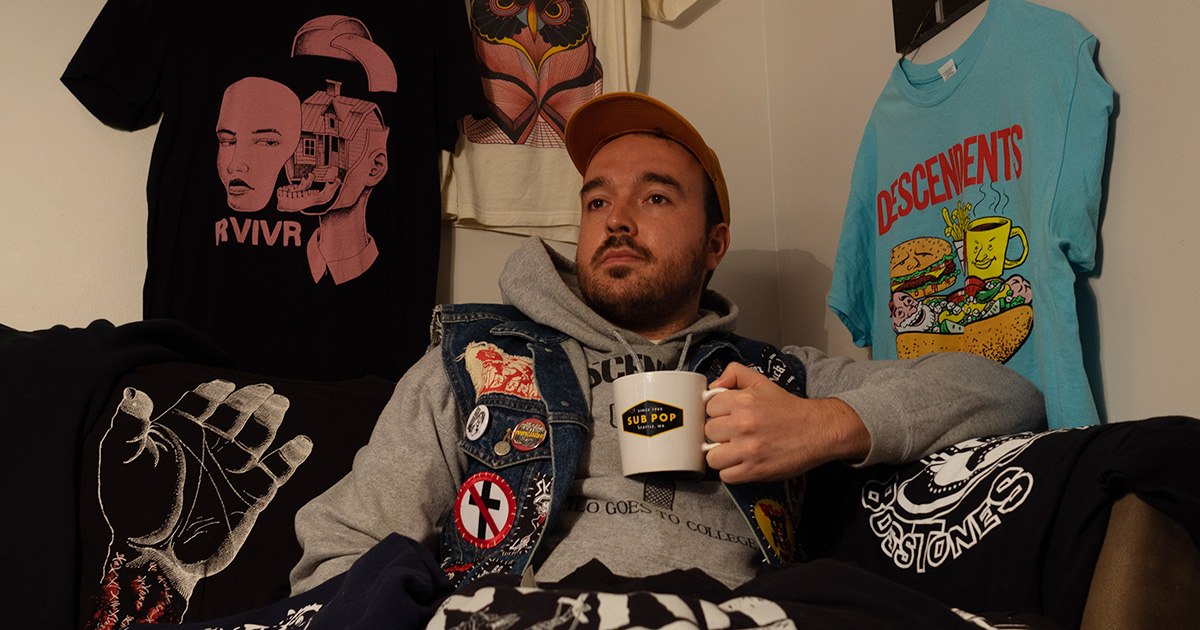 ST. PAUL, Minn. — Local punk and avid merch buyer Ben Riley officially crossed the line from human being to sentient merch booth with the purchase of his latest tank top, according to sources.

“I’ve always loved collecting merch. The more absurd, the better,” Riley said from his veritable rat’s nest of band tees while wearing seven assorted beanies and snapbacks on his head. “When I got tired of shirts and hoodies, I branched out to stuff like watches and grinders and sunglasses. Supporting the scene is so important, especially after a year like last year, so it’s a win/win. My friend’s band knows how much I love them, so they even made Chucks with their name puffy painted on them just for me, which I feel was $250 well spent.”

Riley’s friends expressed a wide range of reactions to his gradual merchandise ascendancy, from awe to pure confusion and sometimes both at once.

“I mean obviously the sheer volume of merch is impressive on its own, but the range of items and how much shit he manages to wear at once is really impressive,” said Becca Mady. “But at the same time it’s like, how does he afford this merch? And why does he feel the need to flex nine different bands with conflicting aesthetics all at once? It doesn’t even look good — more like a ghillie suit designed to hide in my ex’s room. Also, I have yet to see him buy a single record, 7-inch, or even a tape.”

Riley’s achievements did not go unnoticed by corporate merch sellers who find him integral to their business, according to MerchNow marketing coordinator Burt Evans.

“Customers such as Mr. Riley are, to borrow a term from gaming, a whale: a huge spender you want to hook and reel in,” Evans said. “In fact, we specifically cultivate these kinds of spenders with limited merch capsules and bundles. It’s a symbiotic relationship, like those birds that clean crocodiles’ teeth. Honestly though, the type of person who’s buying a local band’s $45 hoodie will buy literally anything — a band could slap their logo on a torture device and they’d buy seven, so we don’t go overboard. We’re not trying to reinvent the wheel, here.”

At press time, Riley was seen signing for a pallet of band tees, which he intended to layer one atop the other to maximize his merch per square inch.