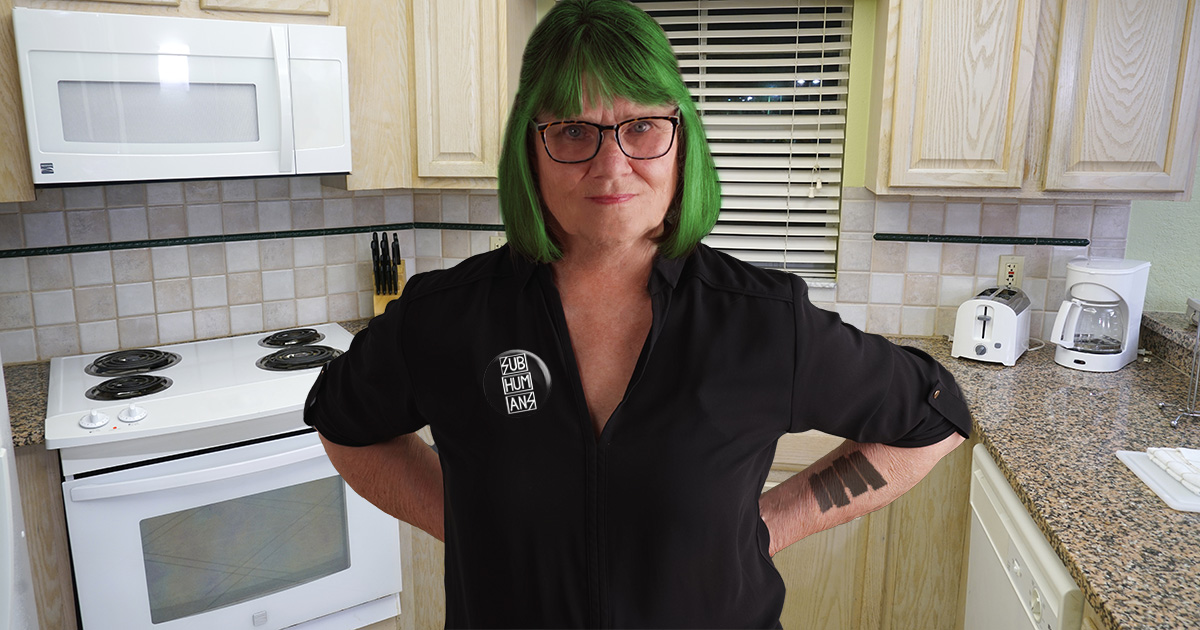 “I don’t think there is anything wrong with wanting the house to look like a goddamn wreck for once,” said Gustavson as she flipped the couch cushion over to the more stained side. “The way your house looks to your fellow punk friends and family reflects on you as a household. All I want is for my husband ‘Dreadful’ Ted and the kids to make sure the garbage is completely overflowing and leaking three-week-old chow mein juice and that there is dog fur all over the guest room, even though we don’t have a dog. Is that so much to ask? After all, I gave up my nipple piercings to breastfeed those kids, so this is the least they can do.”

“Mom is always crazy insistent that the house be completely destroyed before anyone visits,” said the honor student. “Even if it’s just her dirtbag brother who’s always ‘touring,’ which really just means he’s been couch-surfing with a broken amp for a month. I don’t think I should have to put bed bugs in my own room just because the neighbors are coming over for a backyard rager. It’s not like anyone will be going in there unless they get so drunk they piss on my mattress. Again.”

Doctor Martha Carter, a behavioral therapist, was familiar with cases like the Gustavson family and their maternal need to have at least one window broken at all times.

“It is actually very common for punk moms to base their entire sense of self-worth on how filthy their houses are,” said Dr. Carter. “Just like traditional normcore American homemakers have long judged themselves and their peers by their ability to project pseudo-fetishistic imagery of 1950s society or rockabilly parents pride themselves in the height of their infant children’s quiffs, punk moms often only feel accomplished as parents by making sure their homes constantly teeter on the edge of legal condemnation. It’s perfectly normal.”

As of press time, Gustavson was freaking out that no one in the family had bothered to upper-decker their toilet before her in-laws visited for the weekend.