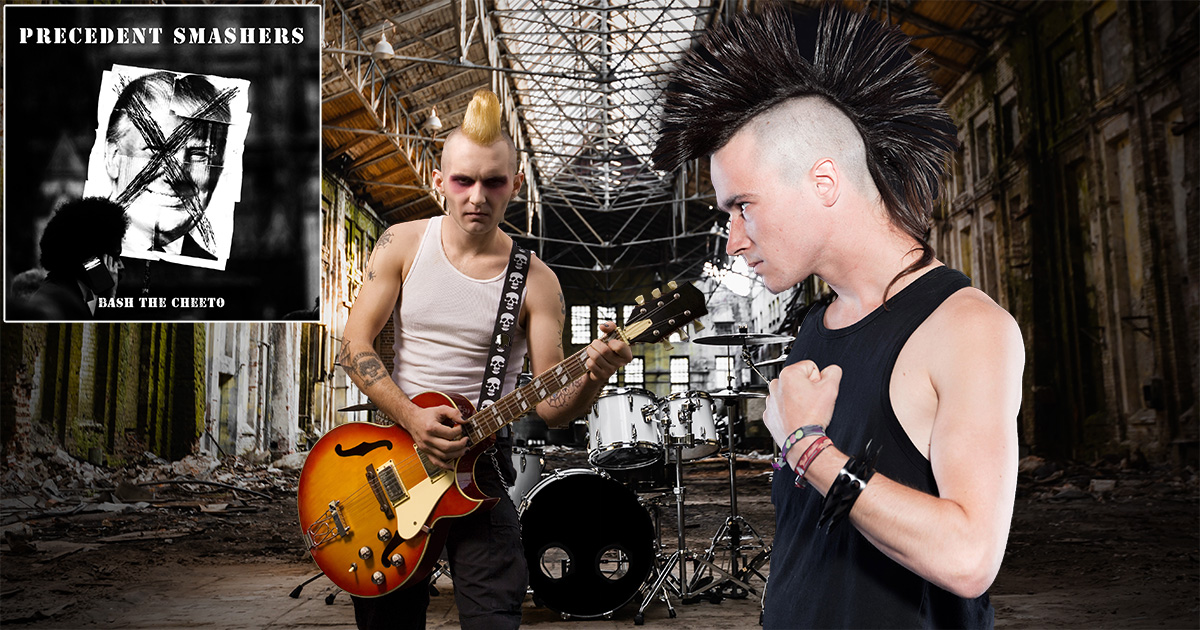 “We consider this album the nail in the coffin for the tyrannical, orange sack of shit. Sure, the government can impeach this tiny-handed fascist, but we all know the system doesn’t work for us, and the only thing that will oust this king of the slackjaws is the power of raw street punk!” said vocalist Ivan Pulido of the blistering 12-track debut they’ve been working on since 2016, while pulling out his dick and pissing on a MAGA hat. “My fave track has gotta be ‘Mango Mussolini’s Reckoning,’ that goes like, ‘Your time has come, fascist clown/golden showers ‘til you drown/open wide and shit in your mouth/we won’t sleep until you’re out!’ We put a lot of thought and time in these lyrics, and we’re stoked to know Donnie will get the message that he needs to bounce the fuck outta here.”

However, due to the timing of its release, “Bash the Cheeto” is leaving fans and friends slightly confused and a little embarrassed.

“They live in a squat house without Wi-Fi or any access to television, so it makes sense that they’re a little behind on current events, I guess,” said fan Angel Banuelos. “But they’re really proud and so optimistic about this album’s potential impact in ousting Trump that nobody’s really said anything. Some of these song titles are so cringe, though — I mean, ‘We’ll Fight Trump in a Cage Match,’ ‘Fuck the Uglyass Trump Kids, Too,’ ‘Skinheads Against Racist Trump (S.H.A.R.T.)’ and ‘Make America Not Vote for Trump Again’ are just the ones that I can remember off the top of my head. There are like, 40 more that are each 50 seconds long.”
Former President Trump’s press secretary Kayleigh McEnany was neither impressed nor concerned when alerted about the brutal takedown.

“I don’t even work in the White House anymore, I don’t talk to Trump, and I have never heard of this stupid fucking band or their dumb album,” said an irate McEnany. “Everyone knows I only listen to country.”
At press time, nobody had the heart to tell Precedent Smashers that Joe Biden took office weeks ago.