Poser Outed After Spelling Descendents with an “A” 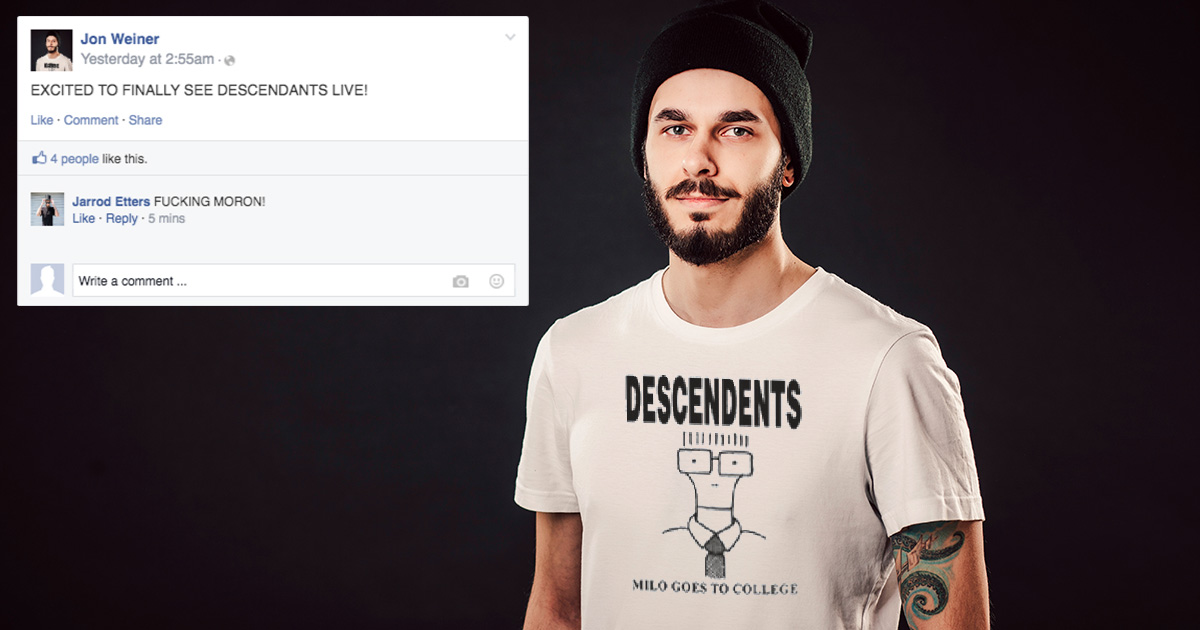 CINCINNATI — Local punk Jon Weiner was outed as a poser yesterday after mistakenly spelling the name of popular punk band Descendents with an ‘A,’ multiple disgusted sources report.

“Everyone is blowing this way out of proportion,” said supposed fan Weiner. “I was excited to see them live and posted about it on Facebook… I swear it was an autocorrect error. Within minutes, everybody jumped down my throat, making all sorts of false accusations. The one that cut deepest was when someone said I only know who they are because Sublime covered ‘Hope.’ It was an eye-opening experience — it really showed me who my true friends are.”

Weiner wasn’t the only person affected by this colossal misspelling.

“I want absolutely nothing to do with that garbage human,” said Weiner’s cooler, older brother, Mark. “I don’t know what all that poser shit is about, but it in no way reflects who I am. In fact, I’m in the process of changing my name to distance myself from that fucking cop.”

“If that motherfucker shows up to Thanksgiving this year I’m going to fucking lose it,” he added. “I already told my parents to delete his number, and if he comes near our little sister, then I hope he has good medical insurance… because the doctors are going to have a hell of a time figuring how his nose got so knocked so far back in his face.”

Punk experts, including Harvard professor William “Crass” Orbishaw, claim that band name misspells are one of the most common reasons people are run out of their respective scenes.

“This happens a lot more than most people think, and it’s not exclusive to punk,” said Orbishaw. “Bands like Def Leppard, Limp Bizkit, and Staind — they’ve all had their names misspelled by fans. What’s interesting about punks is that they are much less forgiving: I can’t tell you how many people had their lives destroyed after adding that extra ‘d’ in spelling ‘The Adicts.’ It’s an epidemic I genuinely believe should be a part of the national conversation.”

At press time, Jon Weiner was photographed at the Descendents show wearing an “Adolescence” back patch.