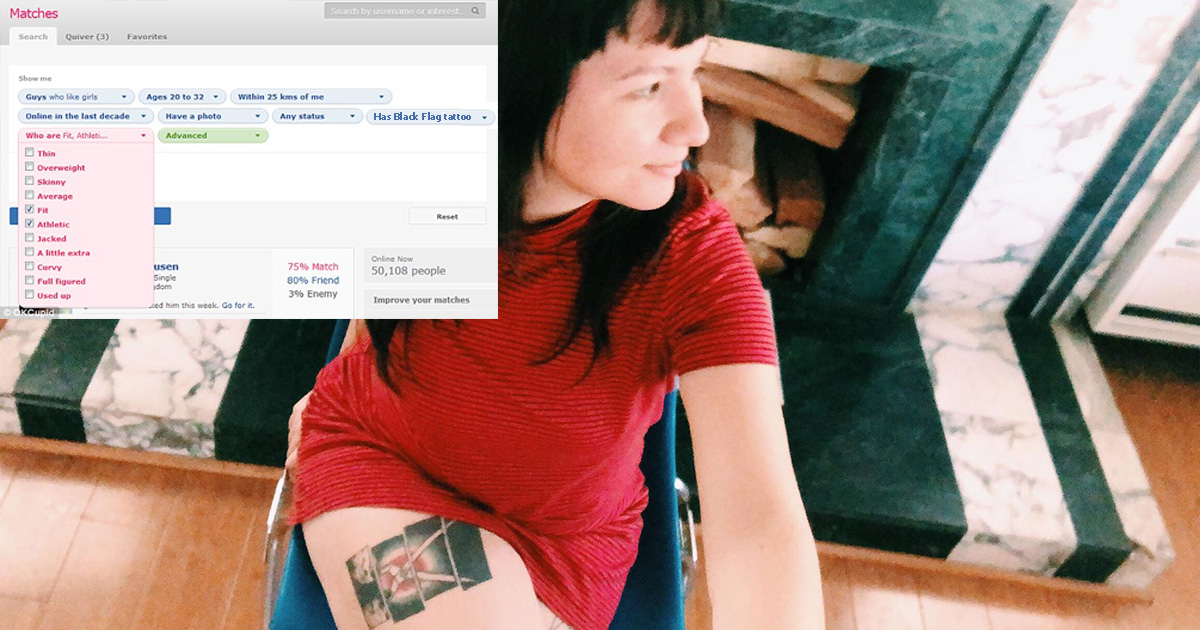 “This was a very easy decision. We polled our employees and patrons of everyone’s favorite dive bar down the street, and found an overwhelming majority of single people have Black Flag tattoos,” said OkCupid spokesperson Tara Martinelli. “This filter will allow you to find a like-minded mate, or steer clear of someone entirely, because you know exactly what type of person they are.”

According Okcupid statisticians, the ratio of men to women with Black Flag tattoos on using the dating app is roughly 3849 to 7. One of the seven women, Lara Karel, is thrilled about the update.

“Before this filter, I went out with so many guys who’ve never even heard of Raymond Pettibon. But now I’ve already got three first dates lined up at the same Flag show next week,” said Karel. “If Okcupid went even further and added an ‘Only watches The Office on Netflix because everything else is boring as shit’ filter, I’d probably find Mr. Right within minutes.”

However, the filter isn’t fool-proof, as some users have noted.

“I ended up with some dweeb who never listened to any recordings before the Rollins era. Apparently he got his bars logo tat after hearing Henry Rollins on Joe Rogan’s podcast,” said Ahn Nguyen. “The guy said his favorite album was fucking Loose Nut — are you kidding me with that shit?”

“After that, I’m taking a break from dating for a little while,” she added. “This is exhausting.”

Meanwhile, OkCupid CEO Ariel Charytan claimed the company is just happy people can cut to the chase about the things they value most in dating.

“We want users to bond over how underrated Ron Reyes is, and their nuanced opinions about Greg Ginn,” said Charytan. “Swiping is fun, but we want to create a lasting connection between two hardcore punks who aren’t afraid to not be buried in a Jewish cemetery.”