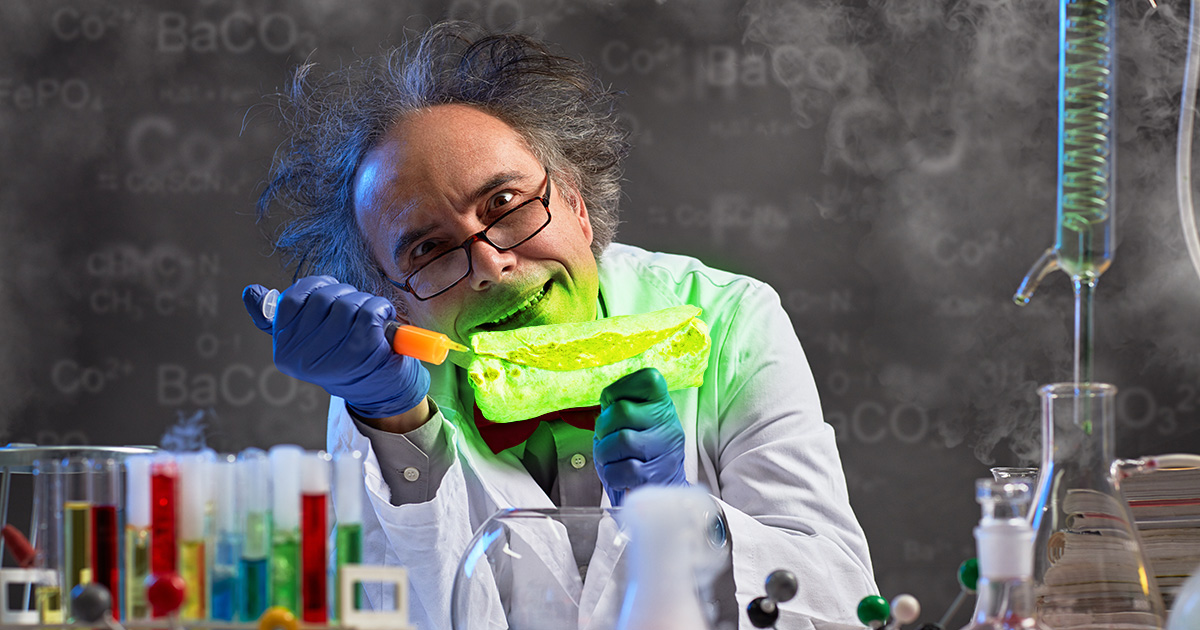 “Those fools in the Taco Bell C-Suite have forbidden me from achieving true greatness,” said Doctor Thesiger while arcs of crackling electricity shot through a pan of refried beans behind him. “Particularly Vice President in Charge of Recipe Development Chad Arthurson, who lacks vision. I have a vision! I have a vision of an atomic-powered eighth layer that will achieve perfection in this jungle of a world, far surpassing these primitive Seven-Layer Burritos and White Hot Ranch Fries Burritos, which are available for a limited time at participating locations. And mark my words, my vision shall be…fulfilled!”

“The Doctor is a visionary,” said Rosmaninoff, cowering behind a table as Doctor Thesiger screamed for more power. “Without him, Taco Bell would not boast such satisfying and innovative menu items as the Pinto Bean Quesarito and the Supreme Pinto Bean Quesarito with Bacon, for only $1.49 more. But his methods have become…extreme. Questionable. I am constantly terrified of what the Doctor will attempt next, like forcing me to steal the Mongolian Book of the Dead from the museum or inject guacamole with DNA labeled ‘Unknown Source.’ And it makes me very uncomfortable how much he talks about Vice President Chad Arthurson.”

“Plus, you can’t even really taste the eighth layer,” Rosmaninoff added. “It’s just like more of the same.”

“This man, this monster, Thesiger, has gone too far this time,” said Arthurson while smoking a pipe in the Taco Bell Executive Lounge. “He has been warned time and time again that some menu items are the domain of God and God alone. While we cannot deny the good he has done for this company and our great line of affordably priced, freshly prepared foods, his mind has grown twisted. We have ordered the Taco Bell Constabulary to his labs, where he will be given five minutes to collect his personal belongings in a box and be escorted off the premises. His abomination of an eighth layer will never be.”

As of press time, Doctor Thesiger was laughing maniacally above the shrouded form of a misshapen burrito, which had slowly begun to twitch.