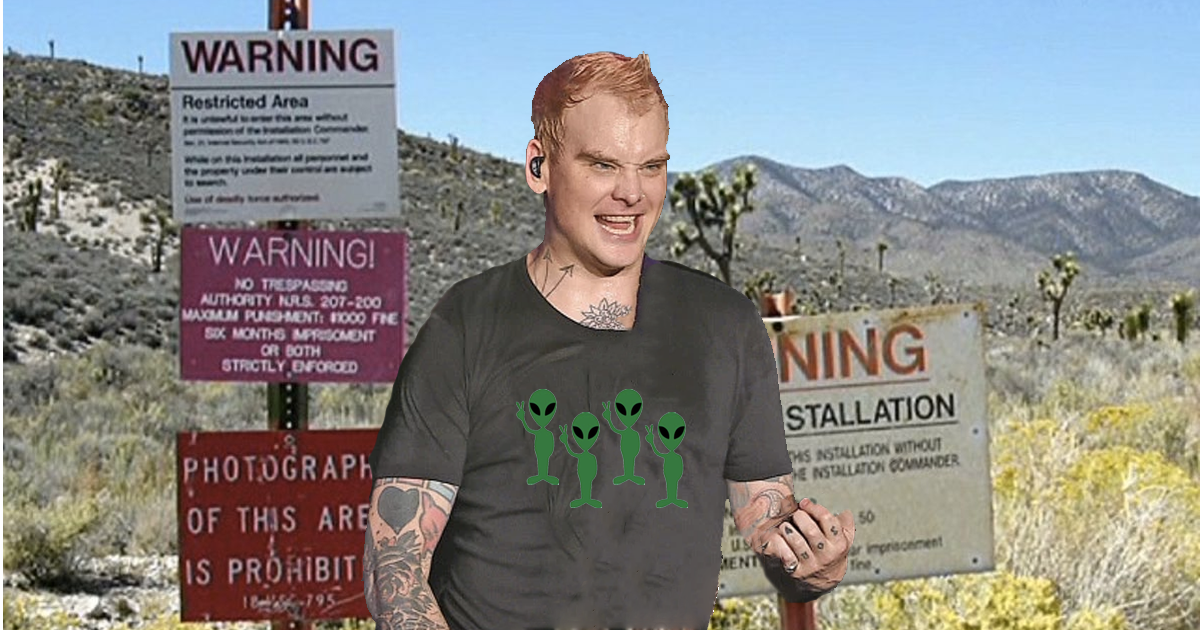 LINCOLN COUNTY, Nev. — Matt Skiba, originally of Alkaline Trio, and more recently singer/guitarist in Blink-182, is set to replace Tom DeLonge as leader of the planned raid on Area 51 in search of extraterrestrials, sources confirmed.

“I’m not entirely sure what Tom’s deal is,” commented organizer Sam Palladino, while sewing aluminum foil into the lining of all of his clothing. “We had him on board for the entire planning process, but now he wants to go to some other random location he claims has levitating organic microbots or something, so we were like, fine, we’ll just get Skiba. He brings all the same qualities to the table, but better.”

Matt Skiba, exhausted by the constant comparison, is confident he could replace DeLonge.

“Tom’s way of doing things lacks refinement and technical skill,” said Skiba, while donning camouflage and running drills for infiltrating an armed military facility. “This project needed someone that can handle pressure whether it is getting bombarded by teenage fans every time you go to the mall, or having heavily armed government agents trying to gun you down as you strive for truth. Now, let’s go hunt some aliens.”

Tom DeLonge, ever the confusing person to read, seemed to not fully understand the situation.

“Listen, I have the thing I want to do, they have their thing, I had been planning that raid since high school, I started that thing,” DeLonge stated. “I could pop back in any time I want, it’s just not what I want to do right now. Besides, there is this giant ring under the ice in Antarctica that when spun correctly, opens a contained and stable wormhole to another galaxy; THAT is what I’m after.”

Representative Tu’Van Xeex of the Gleeu Tr’Suuk race from the [unpronounceable by humans] Nebula believes the whole endeavor is pointless.

“Those idiots aren’t gonna find anything. We addressed this same nonsense after Independence Day came out. We left Area 51 ages ago… but yeah, we definitely prefer dealing with Tom over Skiba.”

As of press time Lil Wayne is unsure if he will participate in the event.

“I’m not sure how many aliens I can handle,” he said. “Lizard people living in the crust of the earth are more my swag.”