Man Going Through Breakup Longing for AIM Away Message Era 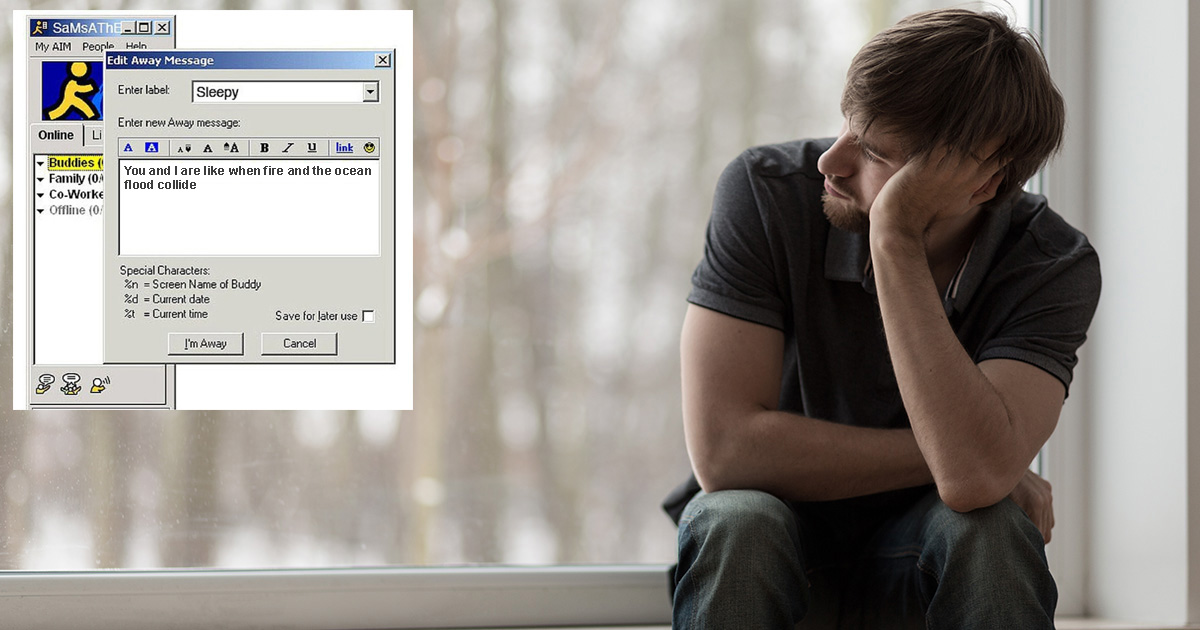 BEDFORD, N.Y. — Recently single 31-year-old Alexander Harwood is reportedly longing today for the era in which grief and sorrow was solely expressed through away messages on AOL Instant Messenger.

“Sam [Larson] and I dated for three wonderful months… and after the breakup, I knew there was really only one way to get my feelings out there,” said Harwood. “I needed to set an away message on AIM with Cursive lyrics, or maybe Say Anything lyrics — or maybe even a combination of the two. But now, I don’t know… how do I make sure everyone, especially her, knows that I don’t want to feel this way forever? A dead letter marked returned to sender.”

“He tweeted, ‘And with my one last gasping breath I’d apologize for bleeding on your shirt 6/28 <3,’ but deleted it almost immediately,” Kerner said. “Then he posted a #tbt on Instagram — even though it’s Monday — of him at some show buying a T-shirt for his ex… I guess hoping she’d see it? The caption just said, ‘Don’t you see, don’t you see.’ I don’t know what he’s trying to do, but I doubt it’s gonna work out how he hopes.”

Indeed, Harwood later posted an Instagram story of himself clumsily playing “Hands Down” by Dashboard Confessional on an acoustic guitar.

“I actually muted him on all social media after he changed his profession on Facebook to be ‘Professionally alone for all eternity,’ and then put on LinkedIn under ‘Achievements,’ ‘Winner of all the best deception and the clever cover story awards,’” said Larson on a date with her new boyfriend. “I’m just glad Livejournal isn’t still a thing — he can avoid the embarrassment of posting poetry or poorly translated lines from Amelie, which we never watched together.”

At press time, Harwood finally landed on setting his preferred away message as his Tinder bio, and was seen swiping right endlessly, alone in the dark, listening to Fevers and Mirrors.