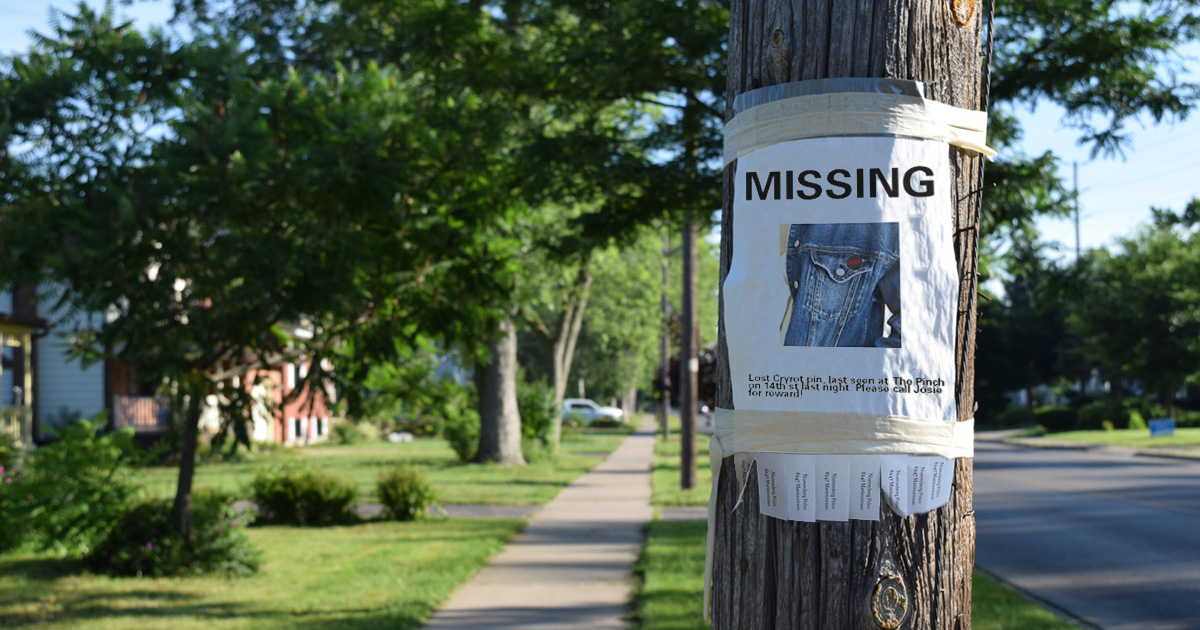 WASHINGTON — Local punk Jenn Schiffer plastered telephone poles all over Washington yesterday with “Missing” flyers, seeking the return of a Cryrot pin that fell off of her jean jacket at a show the night before, according to witnesses.

“I bought the pin a few months ago,” said Schiffer of the missing button. “I didn’t have it for too long, but I got really attached to it. It really tied my semi-vintage jean jacket together.”

Since losing the 1-inch button, Schiffer admitted she “assumed the worst” and has been largely inconsolable.

“It’s been a total nightmare — I can’t imagine the little guy out there, unbuttoned and all alone… or even worse, pinned on some dweeb’s Fjallraven backpack,” Schiffer said. “I haven’t eaten or slept since I noticed it was missing. But that’s given me time to make a lot of flyers.”

Schiffer’s flyers, fashioned with phone number tabs and a detailed description of the beloved pin, have been placed with and over other flyers seeking help for lost cats, stolen bikes, and missing persons. “So far, I’ve gotten a couple prank calls from the same group of 13-year-old boys, so the flyers are definitely making people stop and read,” Schiffer said.

DIY promoter Eric Rhodes, who was near the alleged culpable mosh pit, was unable to provide an eyewitness account, as he’d been called away to unclog the venue’s only toilet at the time of loss. However, he seemed optimistic about Schiffer’s chances of recovery.

“She’s offering a six-pack as a reward, so we’re pretty hopeful,” Rhodes explained. “This community really rallies around tragedies like this. I’ve seen all kinds of things returned to their rightful owners: shoes, flasks, nose rings, you name it. It’s just important to keep the faith.”

At press time, no one had come forward with information on the possible whereabouts of the Cryrot pin. However, a middle-aged man was seen covering most of Schiffer’s flyers with his own, seeking members for his “Kid Rock-inspired” nü-metal band.