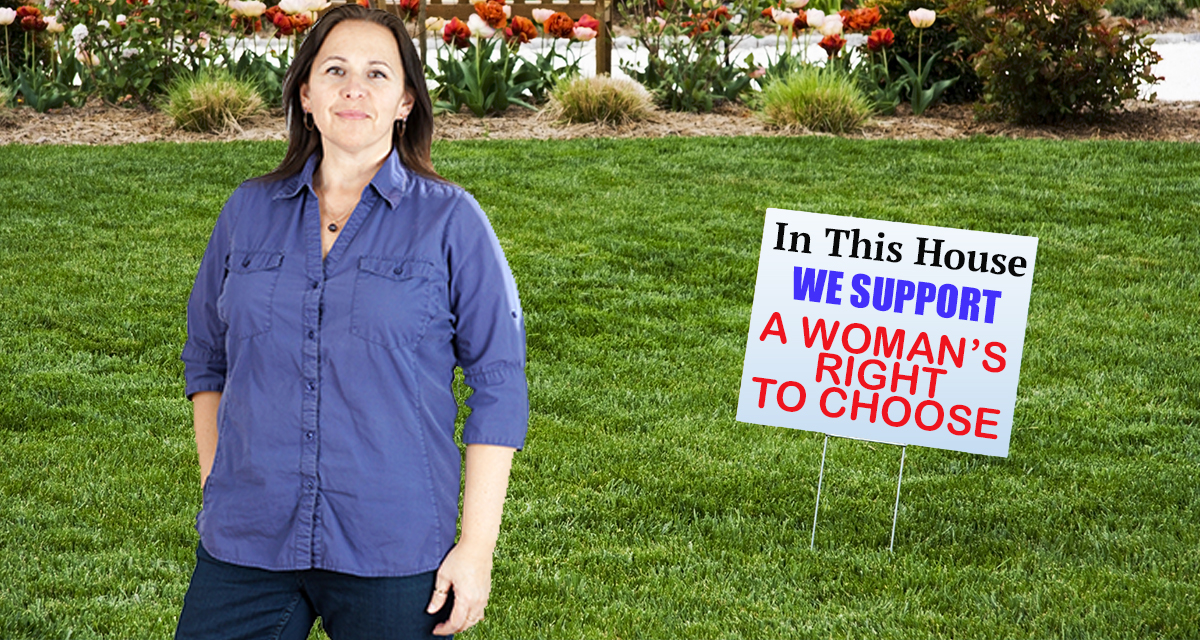 HYANNIS, Mass. — Self-identifying liberals across the country are choosing to fight back against the draconian Supreme Court decision restricting abortion rights by promising to display colorful lawn signs in support of women until rights are fully restored.

“This is a bridge too far. I can’t sit back and be silent anymore,“ said Samantha Turley, while rifling through her drawer to find her pussy hat and “I’m With Her” shirt. “I’m going all out. I’m talking bumper stickers, huge donations to the DNC, and my secret weapon; a lawn sign that says ‘In This House We Support Women.’ And that sucker will be prominently displayed every day when the wind is pretty calm. But that’s not all, I’m going to vote even harder than I’ve been voting this whole time, and I might even put something about it in my Twitter bio.”

Turley’s conservative neighbor, Jim Anaheim, believes that any liberal who doesn’t celebrate America at all times should leave it.

“I love this damn country and everything it stands for. The Supreme Court is a sacred institution and finally, they have some justices who recognize the correct way to interpret the Constitution,” Anaheim said, trying to hold back tears. “I loved it before and I love it more now that this basic human right has been stripped away. If you don’t want to live in a country where an ectopic pregnancy could kill you, and also so could a gun at any moment, then you should just take your yard signs and go to Communist Canada.”

Sociologist Dr. Sofia Zinn this decision by the conservative court has pushed more liberals to the brink than ever before.

“Only time will tell what they will do. We could see a record number of liberals posting selfies with ‘I Voted’ stickers in this year’s mid-terms,” said Dr. Zinn. “Although there is some precedent for this, which we saw after the 2016 election. These were people that claimed they wouldn’t tolerate a Trump presidency and marched in the streets once to prove it. Those of us old enough will recall that they even had those safety pins made, which were supposed to represent something. Many of my colleagues have even been wondering if we will soon see a movement to wear the same color shirt on the same day.”

At press time, Turley was seen cutting up her Black Lives Matter yard sign and putting it in the trash.