Hardcore Legend’s Spoken Word Career Off to a Bad Start 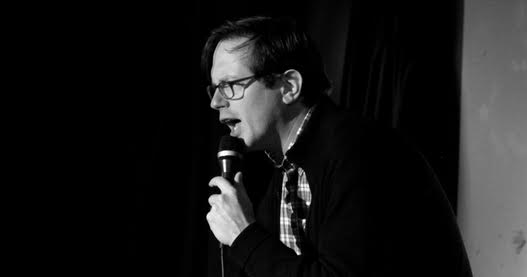 NEW YORK – Noting an audience that was left bored, confused and angry by a series of rambling monologues and artless “poetry”, sources confirmed that Joe Storm’s spoken word debut was a complete and abject failure.

Storm – who is accustomed to enthusiastic crowds, stemming from his time as the vocalist for the legendary Boston hardcore band Blood and Fury – began speaking and was met with apathy and impatience from the audience, who came to see hardcore mainstays Whiplash Attack.

In an attempt to appear serious, Storm wore a sensible cardigan, and a pair of wire-framed reading glasses as he read from a worn Moleskin notebook.

One witness described Storm, saying, “He didn’t look like a hardcore frontman, but more like an ex-con who had a job interview at Barnes and Noble.”

The reading was plagued by sound problems – with the microphone cutting in and out, and a large portion of the talk being inaudible due to Whiplash Attack’s roadies running through their sound check.

Storm read a rambling monologue that covered struggles in his life, such as being bullied in kindergarten, the pain of no one wanting to kiss him during an adolescent game of spin the bottle and the anger he felt about that one time he locked his keys in the car while it was still running.

“Running – yet locked, in motion – yet stationary, my body frozen but my rage being pushed into the red,” Storm said in overly serious tone to the indifferent audience.

“Imma hit the pit so hard when W.A. plays ‘Severed’,” John Pew, a fan who came to see Whiplash Attack, said. When asked to comment on Storm’s performance, Pew added, “I didn’t see the guy talking or whatever, I was in line at the merch table copping this sick fucking W.A. crewneck.”

Members of Whiplash Attack tried to mercifully remove their friend from the stage as Storm lobbied for a few more minutes.

“I got just one more,” Storm said with a voice wavering on the verge of tears. “This one is about that time that I got ripped off by a Swedish kid on eBay.”

Unnamed sources reported that Storm’s own mother was seen leaving halfway through the set, without even finishing half of her $9 vodka cranberry.