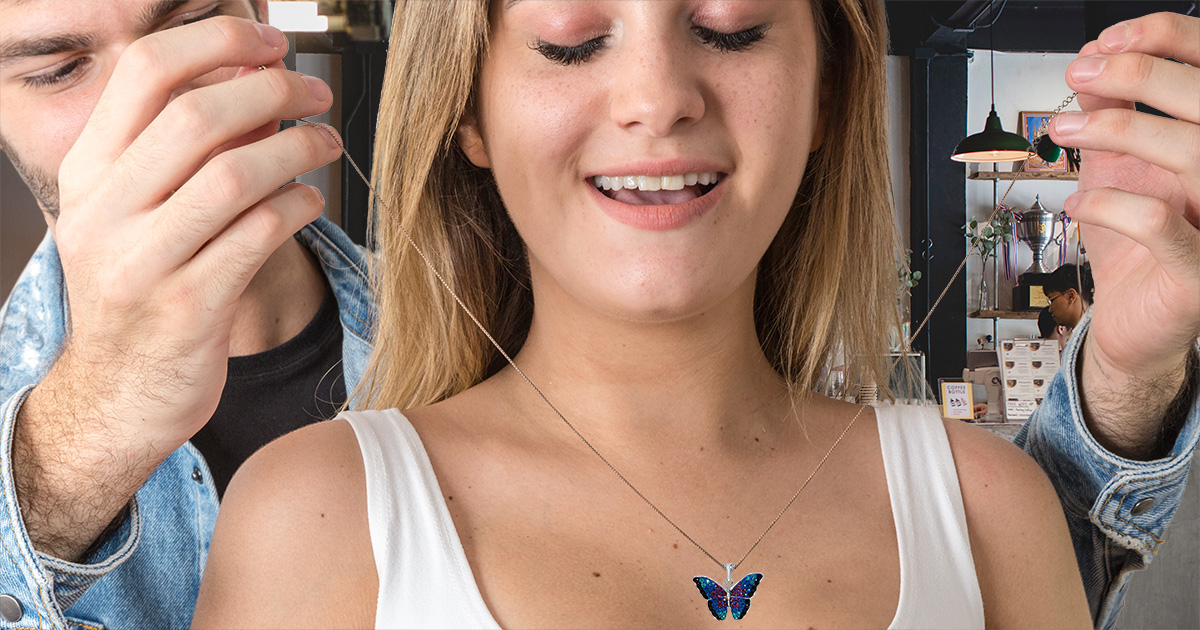 SCOTTSDALE, Ariz. — Local Amazon Prime delivery driver Dave Eisner treated his girlfriend of one year last night to a necklace that’s been stashed in his sock drawer since a random hookup left it on his nightstand two years ago, sources who expect this to come back and bite him in the ass confirmed.

“My lady deserves nothing but the best on Valentine’s Day, so I was stoked when I remembered my lost-and-found collection of shit other chicks have left at my place. There’s a bunch to pick from, and it’s all stuff women like,” said Eisner. “I saved the lingerie for her birthday, so it was a toss-up between the necklace or a pair of pink platforms. I went with the necklace because it’s totally her style, and I thought it was weird to ask for her shoe size.”

“I’m shocked none of these women ever contacted me to get their things back,” he added. “There’s a lot of great stuff here!”

Eisner’s girlfriend, data analyst Michelle Murphy, confirmed that Eisner pulled the unwrapped gift out of his jacket pocket while they were out for coffee, letting the large, bedazzled butterfly fall from a gold chain wrapped around his fingers, adding, “Happy Valentine’s, babe.”

“Coming from him, this is actually a step up. Last year he got me a used bottle of Cool Water by Davidoff that he found under the table at the Roadhouse,” said Murphy. “Don’t get me wrong, it’s awful. The engraving on the back says, ‘To Beth, Love Grandma,’ but at least he’s trying, I guess? I’m not sure what to think when he basically tells me, ‘I saw this trash and thought of you.’ It’s sweet to be thought of, but just once, I’d like to spring to mind while he’s walking through the mall.”

Top shopping consultant and gift-giving expert Robert Chapman noted that while not advisable, this practice is common among younger men.

“I see this a lot on Valentine’s Day — specifically with men in their 20s to mid-30s who hate spending money on anyone other than themselves,” said Chapman. “In the past, men could rely on giving their girlfriend a mixtape with romantic songs that show he cares, but thanks to streaming platforms, that’s no longer an option.”

Eisner further impressed Murphy by preparing an elaborate Valentine’s Day dinner that he microwaved all by himself.